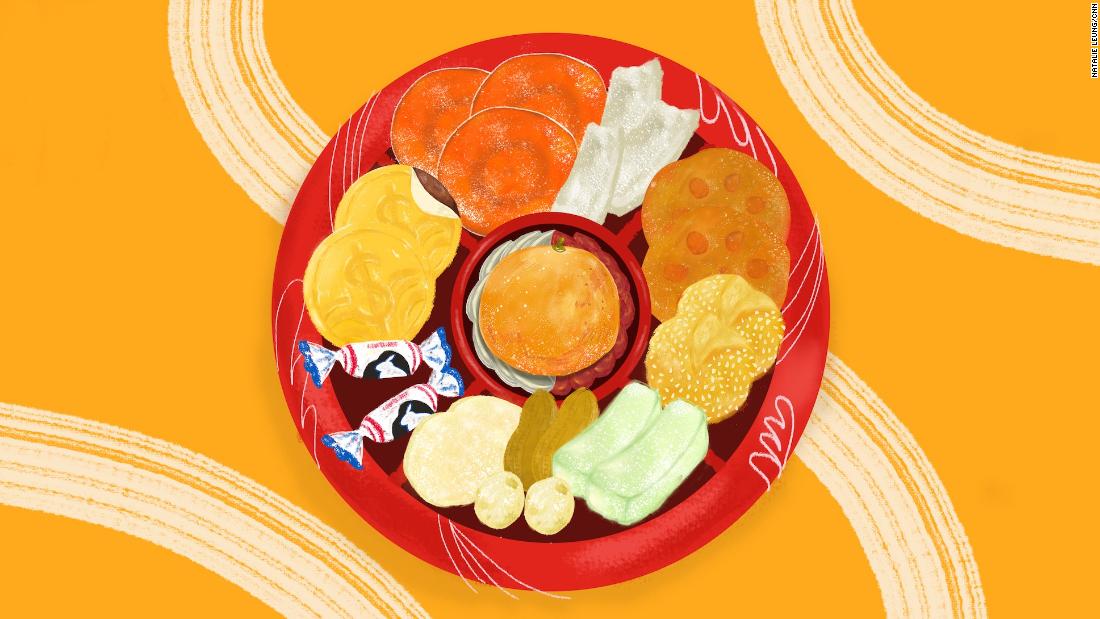 Though lesser known, these exquisitely decorated containers are as essential a part of the celebration as firecrackers and red envelopes.

Every year, families pull them out from the back of the cupboard before the start of Lunar New Year, or Spring Festival, which lasts for 15 days from the first day of the lunar calendar (January 25, 2020).

It’s a time of year when children are actually encouraged to devour sweets — all in the hopes of experiencing an influx of fortune in the year to come.

Hosts have to make sure each of the boxes’ trays — there are usually three to nine detachable compartments — are stocked with specific “fortune” candies, which symbolize wealth, happiness and luck.

“Cyun hap (LNY candy boxes) have a history that can be traced back for more than 1,000 years,” says Gloria Chan, spokesperson for the Hong Kong Culture Heritage Studies and Promotion Association.

“The traditional word ‘cyun’ means ‘to put together, or to bring together.’

“By putting all the fortune candies in one place, a cyun hap symbolizes bringing luck together and wishing blessings for the coming year.”

It’s important to note the word “candy” should be used loosely and can refer to anything from seeds to dried fruit.

Here’s a look at some of the more common candy box inclusions:

When it comes to candy boxes, roasted seeds take center stage — or tray in this case — as eating them symbolizes the accumulation of fortune.

“We produce around 70 to 80 tons of seeds every year — and usually 50 tons of them will be sold during Lunar New Year,” says Bao Yiu-wah, promotions manager at Shanghai Luk Kam Kee, Hong Kong’s most popular family-owned seeds shop.

Shanghai Luk Kam Kee (5 Tai Ho Road, Tsuen Wan, Hong Kong) has been selling seeds for more than half a century. It now operates three retail stores specializing in seeds as well as a seed-roasting factory in Hong Kong.

“A long-time customer came just this morning to get 30 kilograms of seeds for friends and families who live in Singapore and Taiwan,” Bao tells CNN Travel.

“Our seeds are from carefully chosen farms. The melons are grown especially for their seeds — not the flesh.”

The seeds will then be boiled — in various ingredients from soy sauce to grounded coffee beans for different flavors — before being fried till the seeds are crispy, dry and fragrant.

“Most of our customers are over 60 now. Younger generations come usually for their parents,” says Bao.

“It’d be great if the tradition can last — nothing beats families chatting at a table, shelling seeds while waiting for a big dinner.”

It’s all about pronunciation, not taste. Most of their Chinese names sound similar to a word in Mandarin or Cantonese with positive associations.

The Cantonese word for coconuts, for example, sounds like the word for grandfather-son in both Cantonese and Mandarin — ye (grandfather) zi (son).

It signifies a strong family bond and a big family.

In addition to the eight sweets, pistachios (nicknamed “happy nuts” in Cantonese) and sesame balls (referred to as “laughing dates” in Cantonese) are popular because they look like they’re cracking a smile.

Western candies like Ferrero Rocher and Almond Roca are a big hit during Spring Festival thanks to their golden wrappings.

“There are more variations on candy boxes in recent years — even New York brand Lady M is trying to blend in by introducing its own LNY candy box in Hong Kong,” says Chan.

“I believe these modern adaptations are more attractive to the younger generations and foreigners. It encourages those who don’t know much about the traditions of cyun hap to understand the meanings of Lunar New Year,” says Chan.

Check out the gallery at the top of this feature to find out more about the meanings behind some of the traditional box candies.

Hundreds of spa hotels back scheme to make the wellness industry more inclusive for cancer patients
United Airlines to offer Covid-19 testing for some passengers
These are fall’s most popular US camping destinations, according to Campspot
15 magical UK cabins to retreat to this winter
Luxury autumn getaway at Balboa Bay Resort