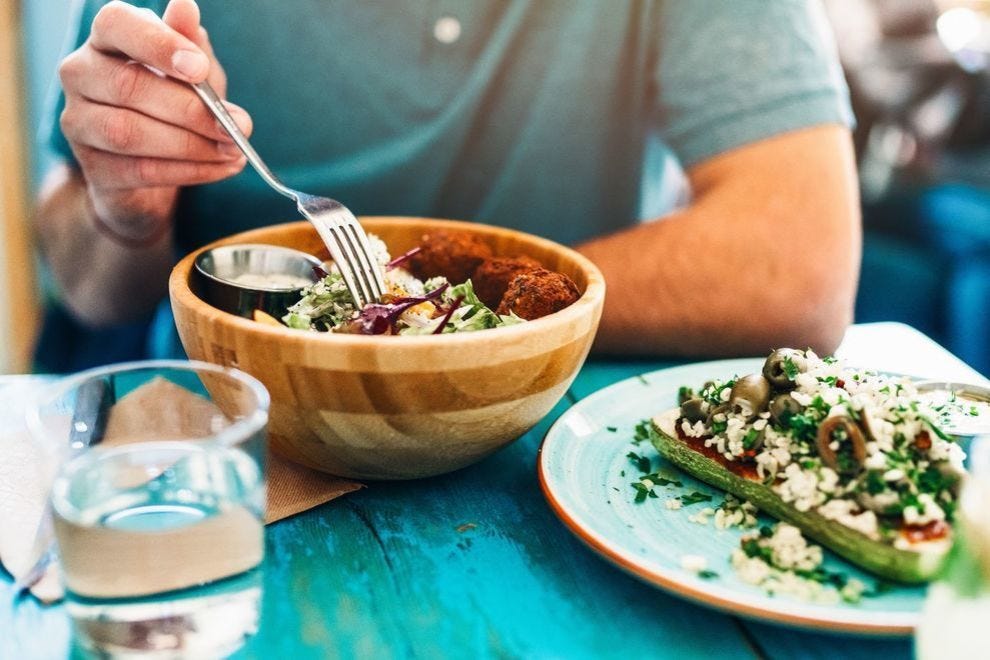 For vegans, vegetarians and those who’d simply like to lessen their carbon footprint while eating delicious food, Brooklyn has become an epicenter for some truly inspiring vegan cuisine.

Choosing the 10 best places to eat vegan in Brooklyn is a nearly impossible task. There are more and more exclusively vegan restaurants popping up every week in the hip borough, not to mention more carnivorous restaurants upping their vegan game.

Here, we’ve selected only entirely vegan or vegetarian spots, with a preference towards those that are entirely vegan. Whether you’re looking for vegan Asian, Ethiopian or Mexican cuisine, pizza or even an elevated chick’n & waffles, there’s a little something for everyone.

LuAnne’s Wild Ginger is a reliably tasty vegan pan-Asian restaurant with locations in multiple Brooklyn neighborhoods. While the one in Fort Greene probably boasts the best ambiance, any of their spots are a great choice for any kind of eater.

Whether you want delicious scallion pancakes, nori rolls, ramen or the healthiest possible macrobiotic bowl, this menu ranges from extra-clean to extra-fried. The food is fresh, the flavors are delicious and the price is reasonable for the sizable portions.

While Brooklyn is teeming with vegan Caribbean food that deserves attention at vegan spots like Greedi Vegan and Sol Sips, our heart still belongs to Ital Kitchen. This is a Rastafarian-style restaurant, which means they still serve fish. Otherwise, everything on the menu is vegan.

The stews, fresh juices and jackfruit dishes are all standout, but Ital Kitchen is as much about the experience as the food. Go when the weather is warm and enjoy that signature herbaceous Rasta scent mixing in with the delicious cuisine as you make some new friends.

The food comes slowly and is all prepared personally by the owner and chef, making this restaurant a true haven away from traditional New York City speed. It’s as though you’ve entered into a secret garden.

While most veggie samplers at any Ethiopian spot are already vegan, Bunna Cafe in Bushwick stands out for being an entirely vegan restaurant that serves a special tea service and brunch. The flavors are superb and the eatery is hip, spacious and often filled with live music.

Afterwards, you’ll be right by the vegan bar Pine Box Rock Shop, where you can sometimes check out a vegan pop-up shop as well.

Much-beloved by vegans in New York City (for good reason) is Champs Diner, whose slogan might as well be “anything you can make, we can make vegan.” This is rich diner food skillfully veganized, and it’s the place to go if you miss any sort of traditionally American non-vegan dish.

A good spot for brunch, pick from a huge menu, where you can find anything from cookie dough pancakes to biscuits and gravy to lobster roll sandwiches to lemon meringue pie milkshakes. This is hangover food at its vegan finest.

At first glance, Little Choc Apothecary in South Williamsburg almost looks too cute for its own good. They offer high tea with freshly-baked pastries, and the entire cafe is both vegan and gluten-free, with crepes made fresh before your eyes.

But the bespoke tone here is earned; the food here really delivers. The savory Garden of Eatin’ crepe is delicious, the daily scones delectable and the smoothie bowls are standouts topped with thick coconut yogurt and homemade granola. Come hungry – and with friends – so you can taste as many dishes and treats as possible.

Probably the most elevated vegan cuisine in Brooklyn, chef Isa Chandra Moskowitz’s restaurant Modern Love is certainly worth a visit. This is where highbrow meets low, with creative vegan takes on dishes like mac n’ cheese and chicken & waffles.

Self-described as “swanky vegan comfort food,” Modern Love is just that at its most skillfully executed. It makes for a special night out or brunch spot for anyone who wants to taste gourmet veganized versions of traditionally animal-forward dishes.

Bar Velo is probably the best date spot on this list, complete with perfect candle lighting and live music that is just faint enough not to interrupt your conversation. This entirely vegan eatery boasts delicious pizza and cocktails, though the sweet potato tacos rank as our favorite.

While the vegetarian spot Adelina’s arguably boasts a slightly superior pizza for crust snobs and is also definitely worth a visit (Paulie Gee’s also has impressive vegan pizza), Bar Velo’s superb ambiance and deliciously varied menu earned it this spot.

Jajaja is a popular and hip vegan Mexican restaurant that has an outpost in both the Lower East Side and Williamsburg. While Bar Verde in Manhattan is also worth going to for gourmet vegan Mexican food, Jajajaja is definitely the place to go in Brooklyn for all your Latin food cravings.

Few Brooklyn vegan spots are more beloved than Toad Style, and for good reason. This hole-in-the-wall spot in Bushwick has been around for many years and boasts some of the best burritos, sandwiches and burgers you can find.

This is rich and flavorful vegan food at its best. Try the locally-made Yeah Dawg to see how good an entirely plant-based hot dog can be, put any sandwich fillings between two waffles or enjoy a gyro made with shredded oyster mushrooms and vegan tzatziki.

The only other non-vegan spot that makes the cut here, Lucky Vegetarian is almost entirely vegan, standing out for its delicious, no-frills Chinese food. Located beneath a Buddhist temple in Sunset Park, this place is not designed for snobs and boasts delicious mock duck and other ‘meat’ dishes, as well as plenty of non-meat dishes.

Similar to the style of the much-loved Buddha Bodai in Manhattan’s Chinatown, the usually soy or mushroom-based meats here have been perfected over a long history of Buddhist vegetarian cuisine. Make a day of it in this part of Brooklyn with a trip to the historic Green-Wood Cemetery and a live show at Barbes afterwards.