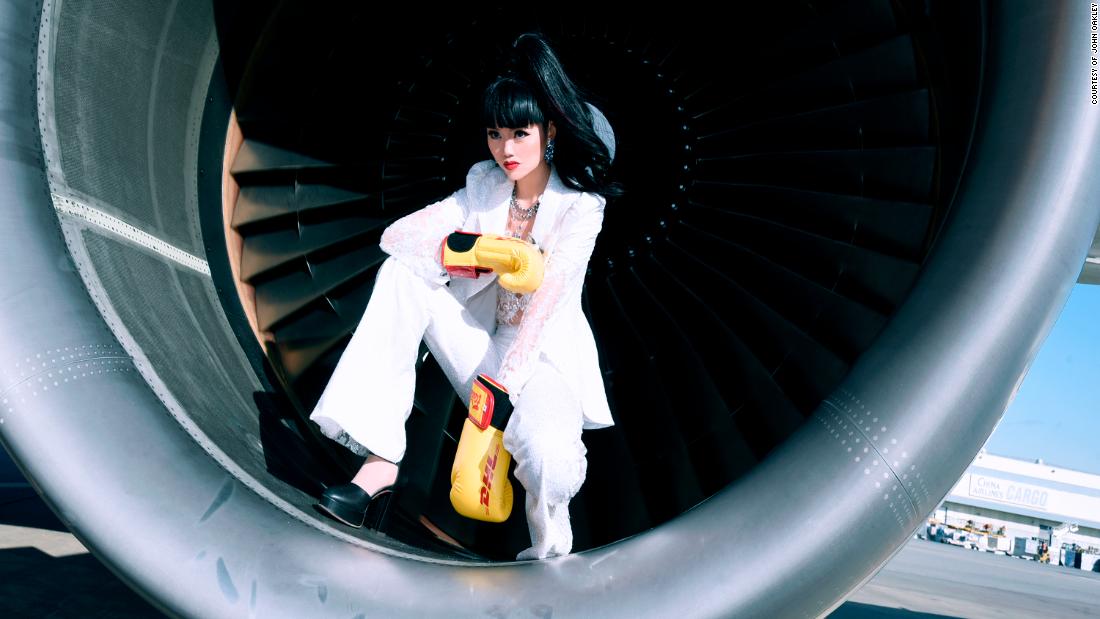 Each year, design-savvy folk — designers, fashion lovers, the rich and famous — flock to the city to witness firsthand the styles of the future.

On February 6, Minh Anh unveiled the first-of-its-kind fashion show in the name of sustainable fashion. The J Winter Fashion Show 2020 was Jessica Minh Anh’s 25th production since her catwalk on London’s Tower Bridge.

Ostensibly centered on sustainable shipping and delivery in the fashion world, the show, a partnership with shipping service DHL, unsurprisingly features a backdrop of DHL’s fleet of aircraft, helicopters, trucks and energy-efficient vans.

And forget the usual backstage: Here, models emerged with a Boeing 767-400 to their backs before assuming the usual fashion-walk strut.

The show featured the wares of several international designers from the worlds of clothes, jewelry and accessories.

The runway in this instance was a 180-foot-long outdoor catwalk near the international airport’s cargo area and away from the arrival and departure terminals.

Soho’s Skylight Studios, one of New York Fashion Week’s main event spaces, this was not.

Maybe, but Minh Anh says that it’s all in the name of bringing awareness to the often-ignored area of how fashion is delivered, quite literally, to stores and consumers.

“Shipping, which is crucial to the fashion industry, can have an eco-friendly footprint,” she says. “My show illustrates that there are green delivery solutions which cut down on damage to the environment and reduce emissions.”

Of course, the cool airport setting feels designed to ensure the show gets noticed.

The Paris-based producer, who has a global following for her attention-grabbing catwalks in unexpected venues such as atop the Eiffel Tower, Grand Canyon Skywalk and One World Trade Center, says she sought out DHL because of its connection to the fashion industry and commitment to sustainable shipping.

“The airport is the heart of DHL’s shipping operations so it was an obvious place to have the show,” she says.

Minh Anh’s role as an innovative fashion producer often has her traveling the world — so the JFK setting is in line with her lifestyle.

Whether or not the location adds to the show’s sustainability is not entirely clear.

Reiner Wolfs, the vice president and general manager for DHL Express U.S. in the Northeast, says that the company handles transportation globally for many famous fashion houses and points to a global company goal: to be at net zero carbon emissions by 2050.

Other solutions include LED lighting, smart meters and energy-efficient heating and cooling systems. DHL also relies on electricity from renewable energy sources such as wind, hydropower, solar and biomass.

Minh Anh says she’s impressed with DHL’s energy-efficient facility at JFK and says it couldn’t be a more perfect stage for her latest show.

Like all of her former productions, the JFK show features the wares of several international designers from the worlds of clothing, jewelry and accessories.

Minh Anh is known for her outlandish productions. In 2016, she produced a show on the sun deck of the German cruise ship AIDAluna in New York.

While the materials these designers use for their creations are not necessarily sustainably produced, Minh Anh points out the many factors contribute to making a show green.

“My show is meant to get the message out about sustainability and shipping, but that doesn’t mean everything in it is sustainable,” she acknowledges.

Message in a hangar

Fashion analysts say that Minh Anh’s message, while perhaps promotional, is coming at a time when consumers, especially Gen Z’s and millennials, care deeply about sustainability and are seeking out sustainably-made clothing and accessories.

“Sustainable fashion is a term that gets big buzz right now,” says Kristen Classi-Zummo, the director of market insights for the research firm NPD. “But most consumers think about the end product when how that product was shipped is also a factor.”

Anh’s show, she says, will raise awareness about circular sustainability, that is, how goods reach consumers and stores.

Hitha Herzog, a retail analyst and chief research officer of H Squared Research, says the interest in sustainable fashion is so heightened that fashion brands could start losing revenue if they don’t pay attention to the topic.

For now, what is unarguably getting attention is Minh Anh’s location of choice — and what it signifies.

JFK is the symbol of travel in the city, says Nathan Maleh, a travel advisor at Embark Beyond, in New York. “When people think of coming here, they always think about flying into JFK,” he says. “It’s the travel hub of New York.”

The JFK show is meant to get the message of sustainability around shipping out.

The idea which Minh Anh is attempting to relay is a crucial one, Herzog adds, but the reality is a truly sustainable fashion production would have no overhead.

“It would be done virtually and you would watch it online,” says Herzog. “That is what the future of sustainability is.”