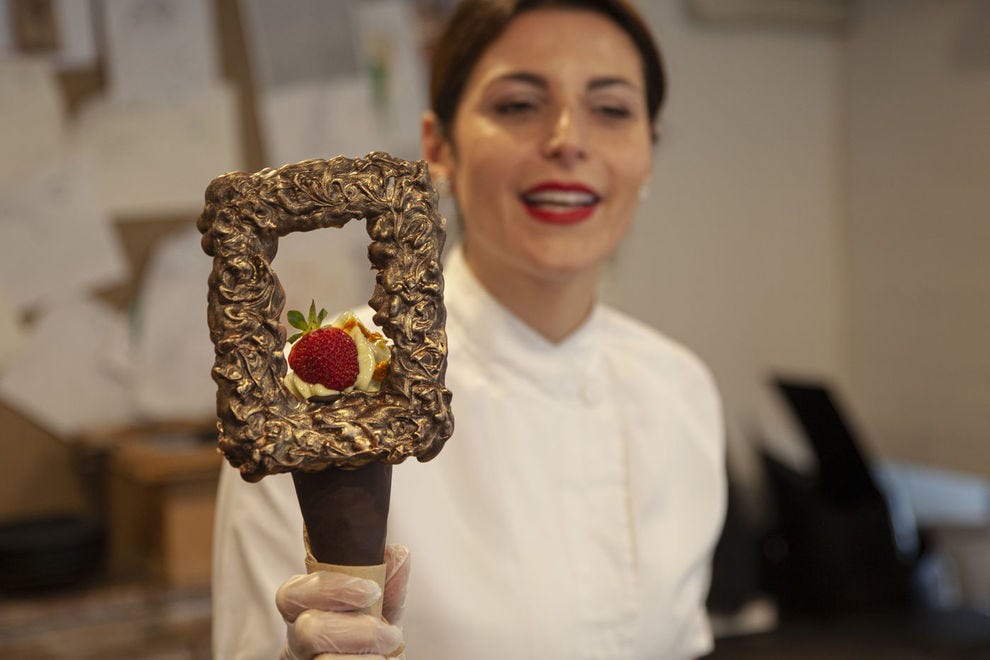 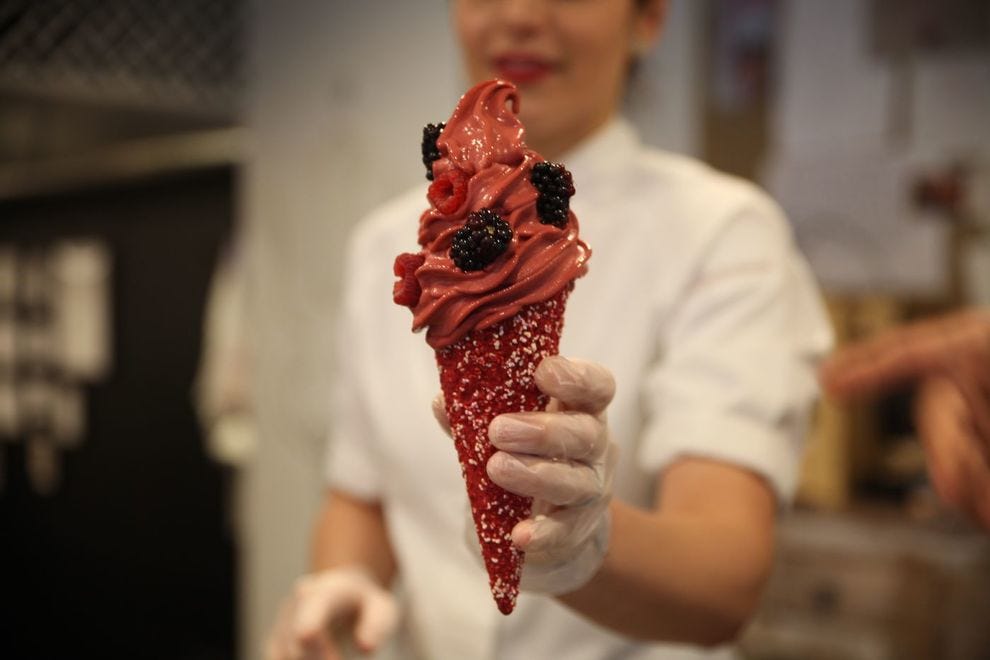 There are a lot of ice cream flavors to choose from and just about as many ways to enjoy this cool dessert. But for the most part, ice cream hasn’t changed beyond that. It’s still scooped, hand-dipped, banana split or swirled into a cone.

Yet, the imaginative ice cream entrepreneurs of Giapo, a parlor in Auckland, New Zealand, have reinvented the world’s favorite frozen treat.

“It wasn’t expressive. It was always looking the same way,” says Giapo Grazioli, co-owner of Giapo. “No poetry had come out of ice cream.” Giapo along with his wife and co-owner, Annarosa Grazioli, came to New Zealand from Italy, and were well-versed in the American and Italian traditions of ice cream-making.

To them, ice cream is more than a dessert, so they set out to find the poetry that the ice cream world was missing. At first they thought about developing new flavors, but anyone can create new flavors and many ice cream parlors focus on that as their differentiator. (Though it didn’t stop Giapo from making flavors like guacamole with real corn and strawberries, kiwi mint and blackberry.)

It was 2011, one year after the launch of Instagram, and the husband-and-wife duo observed a rising global phenomenon: the selfie boom. Nowadays, it’s common practice to build uniquely plated dishes and beautifully designed dining rooms into a restaurant’s business plan. It’s an effort to encourage visitors to share their experiences on social media – think unicorn foods and murals that beg you to pose in front of them – which builds user-generated buzz around a brand.

But in 2011, the idea of making the dining experience “Instagrammable” was a novel concept, one that Giapo and Annarosa saw as an opportunity. They debuted the “selfie cone,” an ice cream cone featuring a chocolate picture frame.

Ice cream lovers instantly got it. Without instruction, visitors to Giapo would buy the cone, snap a photo and share their experiences on Instagram. The Graziolis had developed a new way to engage with ice cream. 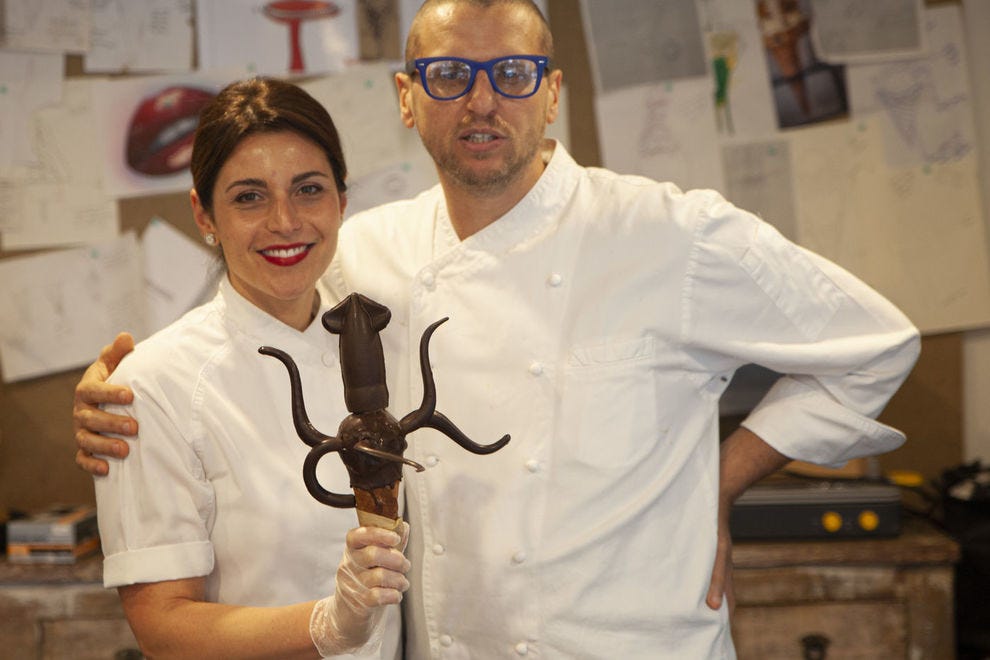 In the following years, the Graziolis continued to turn ice cream into interactive works of art, with much of it being inspired by New Zealand’s diverse culture and history. To celebrate the 10-year anniversary of one of Te Papa museum’s most popular exhibits – the world’s only preserved colossal squid – they created a chocolate sculpture of the creature.

It’s complete with a large head and long tentacles jutting out from a scoop of chocolate-covered ice cream. Though the product was introduced in 2016, it remains one of the shop’s most popular treats.

Several of Giapo’s ice cream experiences are meant to be shared with friends and loved ones. For Valentine’s Day, a popular treat is the pikorua, a Māori symbol that represents the bonds and relationships we form with one another. Like a friendship ring, the pikorua comes in a pair and its shape is completed when the two ice cream cones come together. 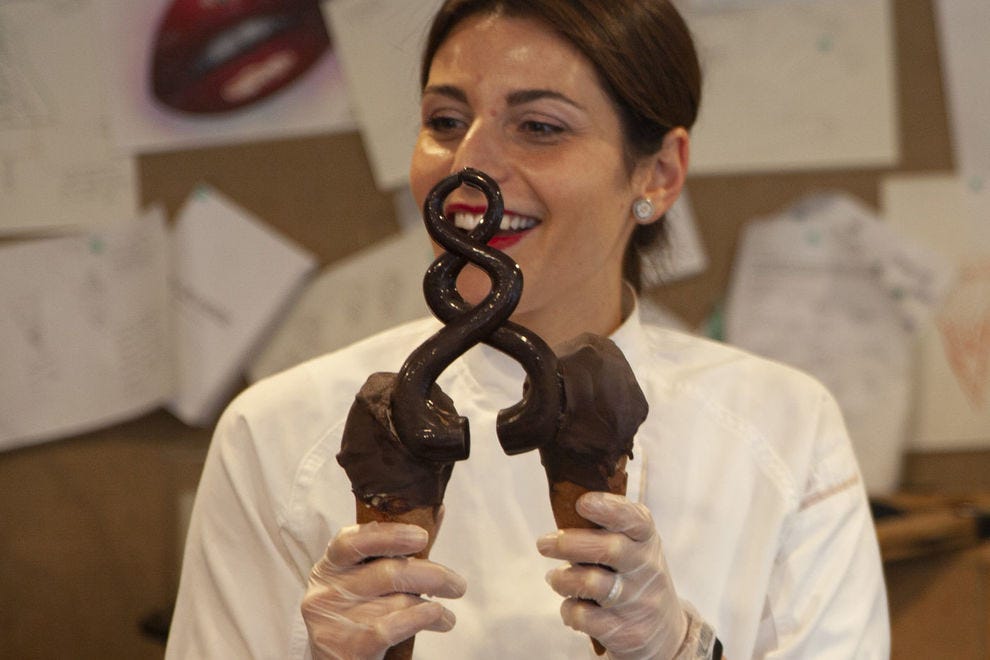 The pikorua, a Māori symbol, is a twisted shape representing how the lives of friends and loves become entwined — Photo courtesy of Kae Lani Palmisano

They’ve also created a chocolate sculpture of the Auckland Harbour Bridge where two halves of the iconic bridge must come together to bridge the gap.

The Graziolis’ imaginations go beyond edible sculptures, though. They’ve introduced creations that encourage people to eat ice cream differently. “People are too focused on licking the ice cream,” says Giapo. Their parāoa parai, a Māori fried bread, stuffed with ice cream challenges you to go beyond simply licking an ice cream cone. There’s even an option to have your ice cream served on a bed of crispy French fries.

For those who might not want ice cream but still want to play with their food, Giapo has a chocolate set of Tū Kōhatu, a stacking stones game that draws inspiration from a traditional Māori game. 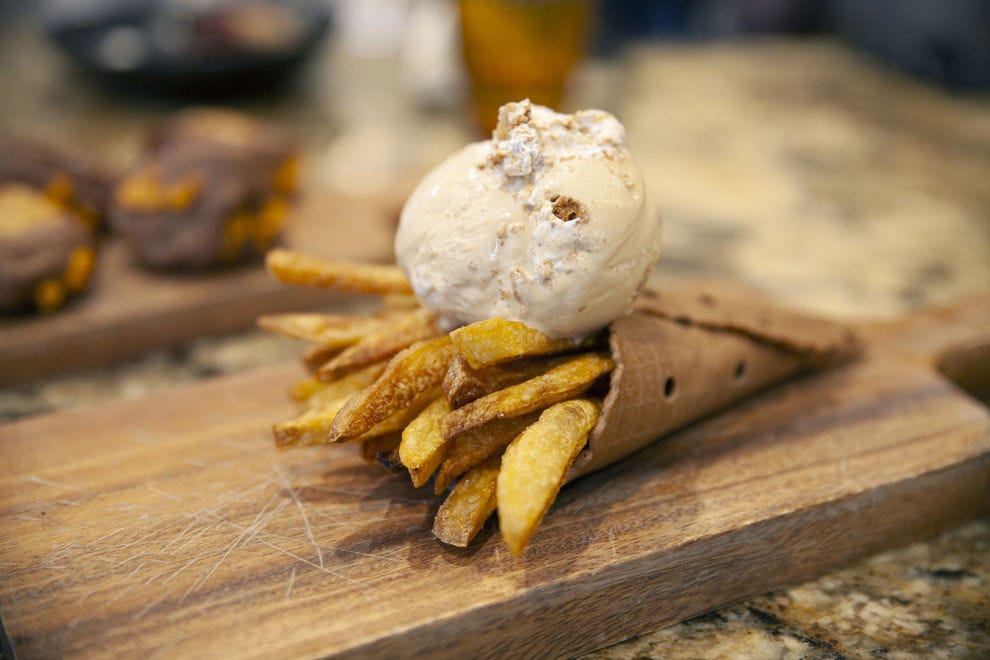 It’s been 12 years since the Graziolis set out to change the way people engage with ice cream, and though they’ve become one of the most popular spots in Auckland, the innovative couple continues to engineer new ice cream concepts. “At the moment, we are working on a musical ice cream,” says Annarosa. “It will be an ice cream designed in a way that will produce a sound.”

Giapo has become more than just an ice cream parlor. It has become a destination for ice cream lovers and an outlet for visitors to express themselves. Not only are these creations Instagram fuel, they’re fun, playful, imaginative and delicious.

Weird American pit stops: The Berkeley Pit in Butte, Montana
Hawaii tourism efforts have backfired. Now what?
United Airlines gives $90,000 in travel vouchers for downgrading passengers
British royals offer a look inside Buckingham Palace’s renovations, as the Queen’s home gets a facelift
More than just moai statues — what to expect from a visit to Easter Island