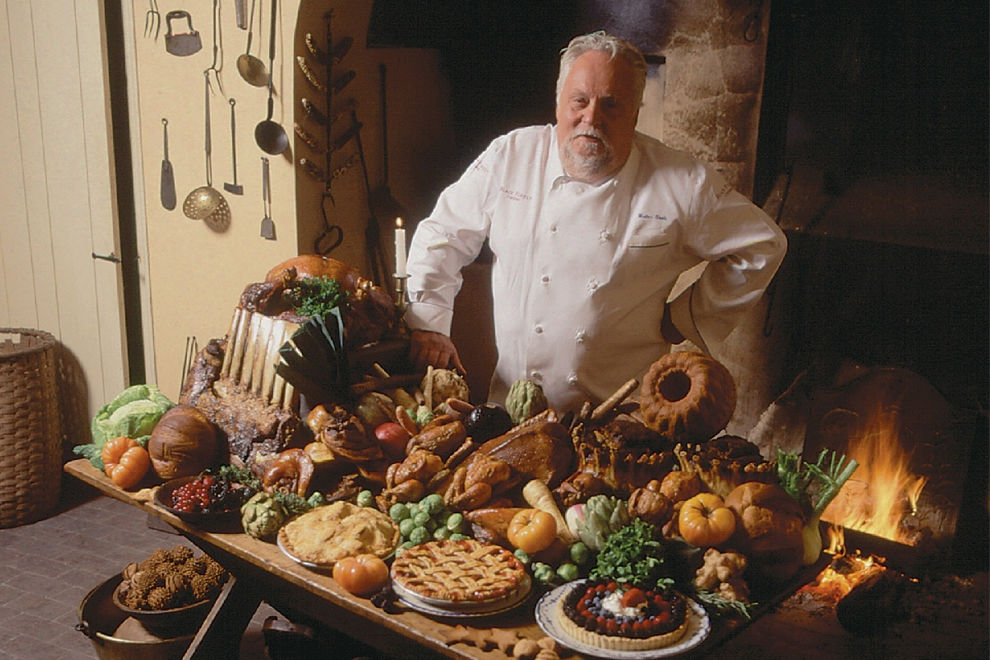 Every year, around 5 million people visit Philadelphia’s Independence National Historical Park where they can “be in the room where it happened” as is sung in Lin Manuel Miranda’s hit musical, “Hamilton.” But just around the corner from Independence Hall, where America’s Founding Fathers hashed out the foundation of a new nation, is a unique stop that history lovers shouldn’t miss: City Tavern.

The original restaurant opened in 1773 and served as a popular meeting spot for members of the First Continental Congress. After long days debating, many of the conversations from Independence Hall continued over drinks and food at City Tavern.

Regulars included such luminaries as George Washington, Thomas Jefferson and John Adams who routinely held meetings there. In fact, the tavern played such a big part of the American Revolution, that in 1777, City Tavern held the first Fourth of July celebration.

But in 1834, the original City Tavern was damaged by a fire and demolished 20 years later. The location that stands today on 2nd Street in Philadelphia’s Old City is a historically accurate replica that was completed in 1976 to celebrate the United States’ bicentennial. 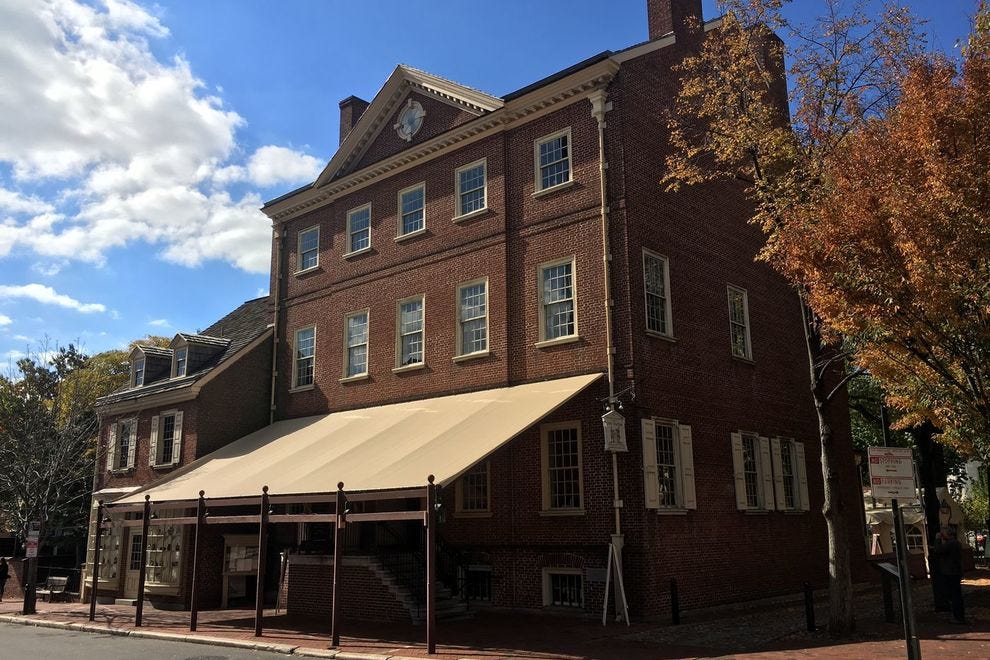 Though the original City Tavern was demolished in 1854, the new building is a historically accurate replica — Photo courtesy of City Tavern

But it’s not just following in the footsteps of our Founding Fathers that draws a crowd to this historic landmark. City Tavern is still an operating restaurant, and everything on the menu is inspired by colonial cuisine – with many of the recipes coming straight from notes and letters written by the nation’s first congressional delegates.

Chef Walter Staib is the owner and head chef of City Tavern, he has published six cookbooks and he is the Emmy Award-winning host of “A Taste of History on PBS.”

“We try as much as we can to be historically accurate in the dishes we serve,” explains Staib. Just as City Tavern was built to be a historically accurate replica of the original tavern from the 1770s, Staib and his team are dedicated to replicating what the dining experience was like in 18th century.

In addition to recreating popular colonial dishes, the waitstaff’s attire and the décor are all inspired by the Revolutionary era. They even set every table with pewter cups!

Chef Staib has spent much of his career researching early American cuisine and has incorporated his findings into his cookbooks, as well as onto the menu at City Tavern. Guests can order dishes like Thomas Jefferson’s favorite sweet potato biscuits, an applewood smoked pork chop (made using an 18th century technique for preserving meats), and pork tenderloin medallions marinated in George Washington’s Porter (his actual recipe for porter beer brewed by Philadelphia’s Yards Brewing Company).

For vegan guests, there’s even a fried tofu dish that Benjamin Franklin included in a letter to Philadelphia’s John Bartram in 1770. But one of the most popular dishes on City Tavern’s menu is the pepperpot stew. “People will finish other food tours in Philadelphia, and come here specifically for the pepperpot,” says Staib.

The dish has a deep history with Philadelphia, and was so popular in the city that its own variant, the Philadelphia pepperpot, was created. But the stew isn’t originally from Philadelphia; pepperpot actually comes from the Caribbean. “Every island has its own version of pepperpot,” explains Staib. “If you just order pepperpot, you won’t know what you’re going to get.”

It’s a hearty stew with a spicy heat that builds with every bite, and lingers long after you’ve finished your meal. It’s made with meat, vegetables peppers and spices that vary depending on location and what ingredients are readily available.

This resourceful dish can be made from anything the cook can get their hands on, which is why it was served to soldiers during the Revolutionary War. Pepperpot was the celebratory meal after George Washington and his troops crossed the Delaware, and it was also the food that saved the Continental Army from starvation at Valley Forge.

But it wasn’t just the patriotic tales of Washington serving his troops pepperpot that made the dish so popular. Its prevalence in Philadelphia, a major harbor city at the time, was due to the amount of spices, peppers and other ingredients from around the world that came to shore.

“Cooks were able to get the ingredients directly from the harbor and they started making pepperpot and selling it on the streets,” says Staib. Pepperpot became almost like a street food – it was easy to make, there were a lot of vendors on the streets, it was a relatively cheap dish and it was delicious.

“Pepperpot, smoking hot” was what vendors yelled when the stew was ready. 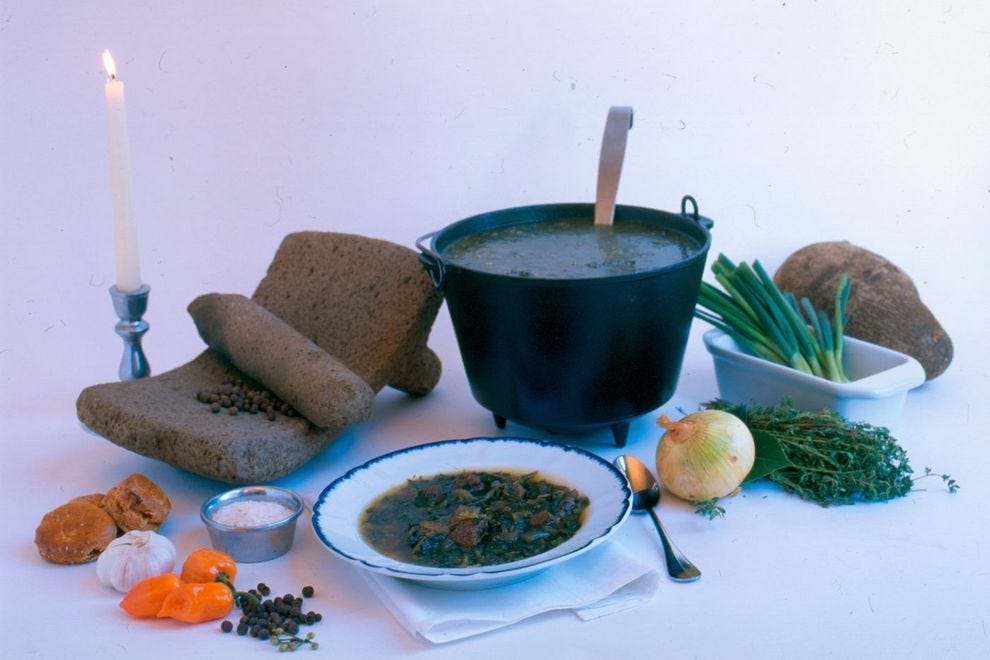 What makes the Philadelphia pepperpot distinct from other versions of the dish is the use of tripe and cayenne peppers. Most Caribbean pepperpot stews don’t use tripe. It was an ingredient added by the French and English who preferred its taste and texture. Veal, chuck beef and other forms of protein are more commonly used throughout the islands.

However, the pepperpot served at City Tavern isn’t the Philadelphia version. Chef Staib prefers a recipe that he learned while researching West Indies cuisine in Port Antonio, Jamaica.

“This pepperpot has more than 300 years of history, because this pepperpot I had to learn from people who didn’t write anything down. It was passed down by mouth and translated,” says Chef Staib. “I learned this recipe in 1989, long before I knew I’d be working at City Tavern. And when I came to City Tavern and started researching the Philadelphia pepperpot, I thought it would be more interesting to do a West Indies version of the stew.”

Offering a West Indies-style pepperpot may seem out of place, but it has some historic merit. It’s likely that George Washington knew about pepperpot before he served it to his troops during the Revolutionary War.

“Not many people know this, but George Washington traveled to Barbados in 1751 to visit his brother,” explains Chef Staib. “There he had cohobblopot, a version of pepperpot with okra. So chances are Washington was familiar with the kinds of pepperpot you’d find in the West Indies.”

These are the US states that require or recommend travelers to quarantine
The best drinking spots in Seville, from flamenco clubs to rooftop bars
Face shields AND face masks now mandatory on Qatar Airways
Taiwan’s first ‘pretend to go abroad’ tour takes off with fake flight
16 Tips You Need To Know Before Hitting The Road In An RV