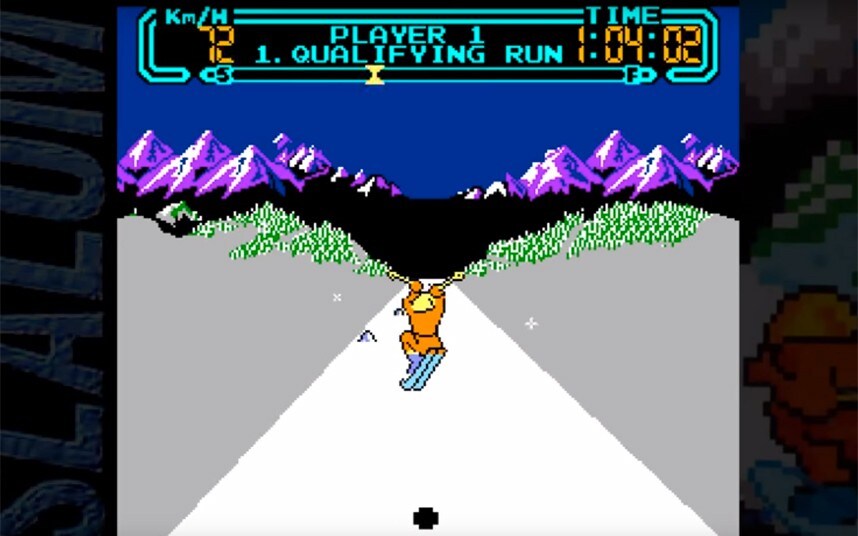 Away from the slopes, snow-themed computer games might be the next best thing when it comes to getting your fix of winter sports action before you get chance to head to the mountains.

Here’s our roundup of some of the best ski and snowboard video games, past and present. From the first Eighties retro fun to the latest mobile-specific adventures, which of these made you guilty of spending a few too many hours gazing at a screen?

This open-world extreme sports game gives you the chance to unleash your inner freeriding daredevil as you explore the loftiest peaks in the Alps, whether that means carving a death-defying line down Mont Blanc or soaring off the edge of the Matterhorn.

Following a successful launch of the original game in 2016, designers at Ubisoft announced the release of a second edition, which takes on new locations and challenges to mark the 2018 Winter Olympics in PyeongChang. Steep: Road to the Olympics allows players the chance to participate in Olympic events such as downhill skiing, slopestyle, half pipe and big air and explore the locations from the 2018 event in South Korea, as well as regions in Japan. The game, which allows players to don their national colours, is in partnership with the International Olympic Committee and was released on December 5 2017.

Hands up who remembers standing in front of the television on Boxing Day attempting their best Eddie The Eagle posture on the family’s new Wii Fit? The Nintendo console sold out in record time and saw us all practising our squats in order to beat grandad at the next family party. Many of these now lie dust-laden under the stairs, but the game still has a multitude of fans.

The Cool Boarders series has four editions, which were released between 1997 and 1999 and have kept gamers entertained ever since. However it’s the third instalment, which went on sale in 1998, that gets most attention. Players could choose between five different mountain locations, 13 characters – with names such as Travis, Sasha and Blake – and 11 boards, then compete in six different events such as big air or slopestyle. The challenge of mastering new five-button commands became strangely addictive.

Nintendo VS and NES

Slalom displays Eighties gaming graphics at their best. The game was originally developed for Nintendo’s VS arcade machine and later made it into the homes of millions on the iconic grey Nintendo NES console. The aim of the game is easy enough – complete a series of downhill slalom runs while navigating various obstacles in a set time period – and it’s gaming at its simplest and greatest. Almost 20 years after its release, it’s easy to recognise the ideas of Slalom in recently developed mobile apps.

With a four-and-a-half-star rating on the Apple App Store, the mobile-only Ski Safari made game of the week in the US, Canada, Australia, Mexico and New Zealand following its release in 2012. Ski Safari 2, released in 2015, spent a period time in the top five paid apps in over 40 countries. Gamers can enjoy a range of adventures that arguably don’t involve that much skiing skill – with levels in the African jungle and the Wild West. It’s more family-friendly than freerider favourite, but the smile of the adorable skier Sven, who’s constantly escaping death by jumping, gliding and flipping his way out of the path of an avalanche, is gloriously addictive.

When PlayStation 2 was launched at the turn of the millennium, along with it came what many gamers consider to be the greatest snowboarding video game ever made, SSX (short for snowboard supercross), which brought winter sports to a whole new audience of screen-staring teenagers. The aim of the developers was to make players feel they were part of an eight-way downhill competition live on TV. SSX was praised for its authentic looking snow and the variety of tricks you could pull off with the click of a remote control. The original game was redesigned in 2012 and rebranded SSX: Deadly Descents, with fancy new graphics and more extreme courses.

One gaming reviewer said, ‘Skiing Yeti Mountain is a future classic. The quintessential winter sports experience on mobile.’ It’s a weighty claim, but with five out of five stars on the Apple App Store, it seems the developers might have nailed it. Maybe it’s the retro Nintendo-style graphics or the simple thumb-swiping control, which allows you to navigate your rider down an obstacle-ridden course, that keeps gamers coming back for more, and with hundreds of levels to complete in search of the elusive Yeti there’s plenty of time to be wasted on this one.

With endorsement from one of the forefathers of extreme sport, Shaun Palmer, the self-taught snowboarder who went on to become professional, this game looked set to be a guaranteed success following its release in 2001 due to its high-profile connections. The game allowed wannabe riders the chance to explore the settings of eight real ski resorts with the aim being to pull as many stunts as possible at any given opportunity to gain points. However, critics found the game struggled to be an authentic representation of what it’s really like to be a snowboarder, but with a Noughties soundtrack, featuring the likes of Papa Roach and Alien Ant Farm of Smooth Criminal fame, it epitomises the ‘go hard or go home’ era of extreme sports.

The design of Alto’s Adventure is positively stylish, making it perfect for big-screen gaming. Described as ‘an endless snowboarding odyssey’ by the developers, the game even has changing weather conditions for each quest on Alto’s adventure. There’s nothing new about the objective of the game, which is to complete challenges, such as travelling a set distance, crossing dangerous gaps and grinding across rooftops, in order to collect rewards, but the design makes you feel like you’re playing an adult video game rather than stealing your kids console for your commute to work.

This entry from Microsoft’s Xbox encourages gamers to seek lifelong commitment to snow sports, with its career mode. Improve your spins, flips and tricks and you’ll progress – but make sure you do them in front of photographers in order to improve your media score. The game was created long before the days of Instagram, YouTube and Facebook, but this type of scoring is scarily realistic, reflecting the real-life progression of a professional winter sports athlete.

Somewhere between a game and a conventional skiing app for your phone, Skadi, which appears to be no longer availabe in the App store, included a “ski safari” function – select the resort you’re in and set your ability level, and the app will generate a route for you to explore, complete with audio directions through your earphones. But what gives it a different twist is the GPS-powered augmented reality gameplay, where you can use the piste map to collect crystals, hunt ibex, power up with magical potions or speak to mysterious dwarves who can help or hinder you on your journey. Released in the early days of augmented reality, whether still available or not, this game deserves a mention for its intuition.

Originally called Carried Away at its early launch in 2017 this build-it-yourself challenge was fully released in 2019 with a new name that sounds more like a viral YouTube video rather than a chart-topping video game. The aim? Players much construct chairlifts, gondolas, jumps and bridges to get skiers and snowboarders from A to B – you’re basically spending a day in the life of a ski resort manager. Build a good path and sturdy structures, all within a budget, and you win. Complete all 100 levels and you’ve basically built the majority of the French Alps.

How Katz’s Became The Most Legendary Deli In NYC | Legendary Eats
Pandemic photos foster community and connection in spite of isolation
I moved from the UK to France during lockdown. Here’s what I found
Plush beds, cocktail cabinets and spa-throoms: The ultimate guide to holidaying at home
You can still visit zoos and aquariums via virtual programs