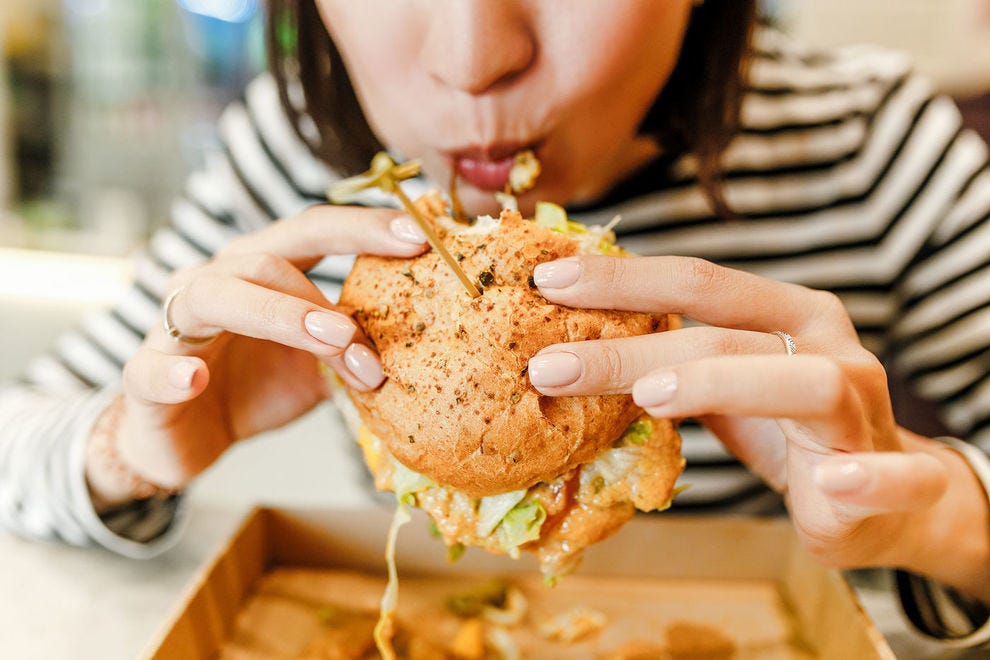 A few years ago, police officers in Santa Fe, New Mexico investigated a crime that might’ve seemed minor to anyone who lives outside the Land of Enchantment. A 25-year-old man allegedly “performed a dance” in front of a customer at a local restaurant, before slapping him and stealing his green chile cheeseburger.

The suspect was caught after a brief chase, and the victim identified him as the green-chile thief before he was taken to jail. (Presumably, the burger was not recovered.)

“It was totally worth it, I bet,” one commenter wrote on the Santa Fe New Mexican’s website. He might be right: green chile cheeseburgers are delicious. But it also seems like the state’s most severe kind of theft, because this is a place that takes its well-known burger style seriously.

“We wanted to embark on a journey that would be all about what New Mexico is all about,” Isotopes General Manager John Traub said without a hint of irony.

But this burger (which, yeah, is topped with a mound of green chiles) isn’t America’s only obsessed-over regional variation. Here are five other beloved burger styles that you should try:

According to the Library of Congress, the first hamburgers in America were served in 1895 at Louis’ Lunch in New Haven, Connecticut.

“Hamburgers are served only on white toast, with a choice of onion, tomato or cheese, but no condiments,” the Library intones. But if you drive 20-ish miles north, condiments are welcome and the burgers are steamed to perfection. Oh yes. STEAMED.

For more than 50 years, Ted’s Restaurant has served burgers that are cooked inside specially-made stainless steel steamer boxes.

“The bottom of the steamer contains water that heats up and cooks the meat in boiling vapor in about 10 minutes,” Atlas Obscura explains. “It’s a delicate balance.” A gooey mass of (steamed) cheese is poured on top and yeah, go ahead, use all the ketchup and mustard you want.

We don’t blame “Hamburger Charlie” Nagreen if he’s haunting the heck out of the Library of Congress. The Wisconsin man also claimed to have sold the first hamburgers in America. According to Thrillist, Nagreen, a meatball vendor, decided to flatten them out and put them between two slices of bread.

He was also known for frying his patties in copious amounts of butter, and that part of his legacy has been kept alive too. Kenneth “Solly” Salmon of Solly’s Grille in Milwaukee perfected the butter burger, which is exactly what it sounds like: a burger topped with (or, in some cases, filled with) a ridiculous amount of butter. You never liked your stupid aorta anyway.

“In North Carolina, it’s acceptable to add to a hamburger whatever’s left in the refrigerator, the slaw and the chili and the cheese and the onion, all those food groups,” Duncan Murrell wrote for the all-things-North Carolina magazine, Our State. “Pile them up — it’ll hold.”

He also claims that the popularity of the Carolina-style burger – which is topped with chili, onions, coleslaw and mustard – just exists because North Carolinians know that all side dishes can be improved when they’re “eaten on a bun.”

He might be right (and a Carolina-style hot dog has exactly the same components) but why argue about it when you could be eating one instead?

This burger, which is also known as the Cuban burger, has its origins on the food carts that lined the streets of Havana, Cuba in the early 1930s. According to Burger Beast, a man named Dagoberto Estevil introduced it to Miami in 1961 when he opened his Fritas Domino restaurant in the city’s Little Havana area.

His original restaurant has since closed (although his family now runs their own Fritas Domino joint), but the burger remains a South Florida fave.

Regardless of where you order one, a proper frita Cubana burger patty is seasoned with a blend of smoked paprika, cumin and pepper, and topped with a pile of crispy fried potato sticks, diced onions and ketchup. It’s then served up on – what else? – a Cuban roll.

If you mention Mississippi’s own slugburgers, it seems to be a requirement that you have to point out that they’re not actually made from ground garden pests. Instead, one widely circulated origin story says that the name came from a slang term for a nickel, back when U.S. currency had cool-sounding nicknames – and when you could get a burger for a nick..er, a slug.

What’s Cooking America explains that cooks in diners used to mix various “extenders’ with their ground beef so they could make it last as long as possible. John Weeks, a hamburger seller in rural Mississippi, was no different. He mixed potato flakes and flour into his beef patties, which he did, in fact, sell for a nickel.

At the Weeks Diner (which still exists), the potato flakes have been swapped out for soybean grits, and the price has gone up slightly, but the slugburgers are still top-shelf.

Enjoy a Sustainable Weekend in Graz
New Releases From California – Duckhorn, Cade, Donum And Chappellet
Coronavirus Layoffs: Boeing Lays Off 6,770 Workers Amid Pandemic
How hotels are adapting to the new reality of COVID-19
The hidden wonders of England’s most ‘boring’ county