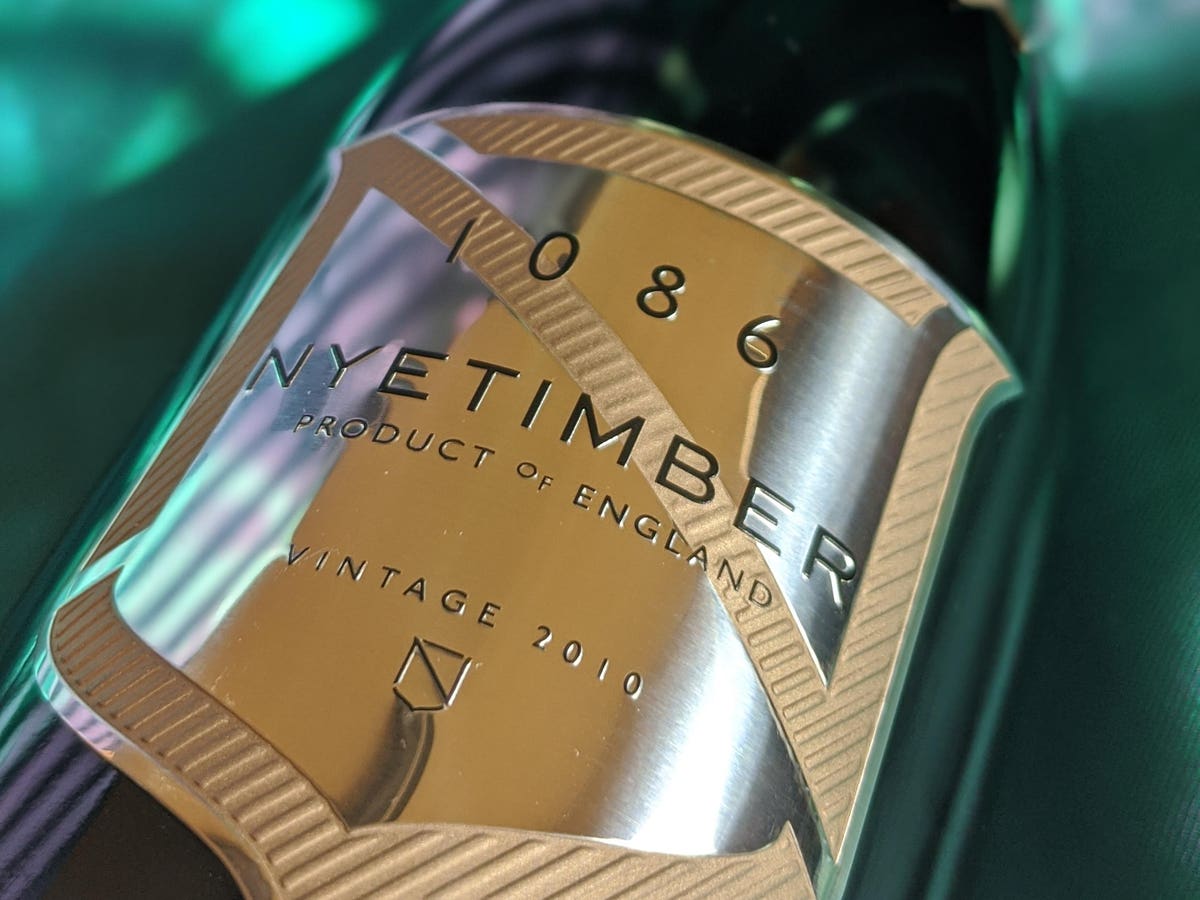 It is virtually impossible for a young adult, such as one receiving an undergraduate degree at university, to determine what she wants to do for the rest of her life. It can even become more complicated for two people who have met each other at such an early stage of life to find a mutual journey that fulfills each person in the relationship. Yet that is the case with Cherie Spriggs and Brad Greatrix as they met each other in 1998 as biochemistry undergraduates with a mutual interest in wine. Over 20 years later, they find themselves married and leading the way for English sparkling wine, in England, as winemakers for Nyetimber, the winery that established itself as the gold standard for Southern England.

Cherie and Brad were brought on by owner Eric Heerema to become the head winemaker and winemaker respectively of Nyetimber estates in 2007 and certainly since that time, Nyetimber has been one of the pillars in ushering in a new era of English sparkling wine. But before digging in their roots at Nyetimber, they first furthered their education receiving their master’s degree at the Wine Research Centre in Vancouver, Canada, and then “studied enology more specifically,” according to Brad Greatrix. They then started a “self-imposed internship” with some legendary wine producers in the Northern and Southern hemispheres to learn the “artistic and subjective side of winemaking, such as tasting and blending.”

Such a commitment to finding excellence requires major sacrifices, and hence, Cherie and Brad lived out of their backpacks while on this self-imposed internship but they were happy to do without for so long as it was worth it if they had the chance to work at a winery that could teach them something “valuable”. Brad noted that Cherie would point out the Drouhin Family (Domaine Drouhin) in Oregon as an influence for their “sensible approach to winemaking there” that had no predetermined formulas and Brad himself noted his experience with the late Paul Pontallier at Château Margaux for similar reasons. Their experiences with thoughtful wineries helped them to develop the intuition “to just stay out of the way when it’s appropriate to do so,” expressed Brad.

Certainly England is known as a country that was the originator of wine experts, wine critics and wine writers in the English speaking world. The British have had a long history of enjoying wine as well as traveling to wine regions to increase their knowledge, especially in regards to wines made in Europe. But it is a new concept for the world to consider this place as a premium winemaking country despite it producing top-tier traditional method sparkling wines for over a decade. In the beginning, it was difficult to convince U.K. drinkers to switch from Champagne to an English sparkling wine but today the wines enjoy great success in their own country as they grace many of the top wine lists due to the current demand. Although there are many English sparkling wineries that are finding success as well as accolades for their wines, it is Nyetimber who was the first to carve a successful path.

Some may talk about the Kimmeridgian soil in Southern England that is also found in Chablis and some parts of Champagne and the Loire Valley in France but Brad noted that such soil is found further west from where Nyetimber is located but that they still have ancient soils laid down from around 120 million years ago that are an “accumulation of rich layers of seabed deposits on what is now dry land.” Brad continued to explain that there are two types of soil that define their vineyards: greensand and chalk. Nyetimber has ten separate vineyards across three counties (Kent, Hampshire and West Sussex) and that all sites “are in sheltered positions, generally surrounded by natural habitats.”

When it comes to the different counties, Brad explained that Kent and Hampshire vineyards (dominated by chalk soils) had more perfumed fruit with floral and mineral qualities that were “very elegant” and that vineyards in West Sussex (dominated by greensand – a diverse soil) had more “fruitiness and power”. Brad also pointed out, “The greensand and chalk that we have on our sites is well matched to our long, cool growing season.”

When it came time to address global warming Brad said, “Climate change is a more suitable term than global warming.” He did state that the long-term trend for temperatures was increasing but that the weather year to year was still jumping up and down. In 2012, Nyetimber didn’t make any wine because it was too cold and wet. “The common story understood in the UK and abroad is that it’s getting hotter and we as wine producers are benefiting here in England -when in fact the variable temperatures and conditions are making things ever more challenging,” noted Brad. He thinks winemaking will become more difficult around the world due to the variation in the weather and so they do not have it easier than most wine regions although owning their own vineyards allows them to adapt quicker to the surprises of Mother Nature.

It is amazing to see such a partnership flourish such as the one between Cherie and Brad that is evident by Brad expressing that it is a great advantage to be married as they have been tasting together for 20 years and they have a “close relationship and understanding of each other’s palates.” He expounded on this idea, “Wine is a very subjective thing – so when we have to make choices, we can take advantage of that and we can defer to each other’s strengths and come to a decision from two different perspectives.” But it seems that also part of their success of having a marriage and working partnership that becomes complementary to each other is that they are both rooted in taking the journey step by step instead of just trying to get to an end result.

If one has too much emphasis on just reaching one’s goal and kicking back to just reap the rewards, it will be difficult to not only accomplish anything of significance but virtually impossible to sustain high quality work if there is not a constant curiosity to learn, ability to be agile in varying situations or a strong constitution to continue the passionate fight, as it will be too easy to give up again and again and again. Even when one finds great success, such as Nyetimber, there will always be setbacks, such as the loss in 2012. Cherie and Brad didn’t make their winemaking home in the vineyards of Nyetimber because it was going to be easy, they did it because they “strive for intensity, complexity and delicacy” in their wines that Nyetimber’s climate and soils deliver most years; although despite the place having a great potential, unlocking that potential is complicated, and may only become more so as time goes on, thus it needs people willing to put in the work day after day. Brad expressed earlier that their journey together started with the willingness to make sacrifices as long as there was something valuable to be gained; Nyetimber vineyards reward their work by producing “rare” wines that have an “intensity of flavor with a lightness of touch” and thus they are continually happy to make the sacrifices that are needed each vintage to find that rarity in all sorts of circumstances.

Brad discussed the reality of being a cool climate region with a long growing season, and hence, their sparkling wines show the influence of the seasons in the wines in a “very transparent way”. He loved their vintage-dated wines for how well they “represent and capture a year” and at the same time also loved having a different opportunity with their multi-vintage wines, where they blend across years, to show “Nyetimber’s house style in a more clear way” by moving the vintage-effect slightly to the background.

2010 Nyetimber, 1086  Prestige Cuvee: The “1086” represents the pinnacle of Nyetimber’s winemaking and Brad noted that there were vintage variations in the south of England. 2010 had cooler temperatures in the beginning of the growing season and drier weather that kicked off good conditions for flowering that was followed by a hot, dry summer that yielded a healthy crop. The cool, wet periods in August didn’t cause much issue as they had “advancement gained in the early part” of the warmer season and the cooling of the temperatures towards the end of the season allowed for “gradual ripening to produce fine, delicate flavors in the berries.” A rich nose with toasted spice, brioche and baked apple with a creamy body created by fine bubbles with delicious marzipan notes that had a crisp, mineral-driven finish.

2010 Nyetimber, 1086  Prestige Cuvee Rosé: Stunning pristine color that had hues of purple and pink that was further highlighted by the black cherry nose singing from the glass with hints of cinnamon and orange blossom – beautifully perfumed. Full of flavor while also being bright and nimble with a silky texture created by the tiny bubbles that caressed the mouth.

Nyetimber Cuvee Chérie Multi-Vintage: Brad said that they launched Cuvee Chérie, previously referred to as a Demi-Sec, in 2012, in response to the demand from chefs and sommeliers for a sparkling wine that could be paired with dessert courses as it has 38 g/l residual sugar. Cuvee Chérie has become quite popular as not only a premium sparkling wine paired with cheeses and sweet dishes in tasting menus but also with spicier cuisines. Actually the stony, chalky note was really evident with this demi-sec which was surprising and it balanced generous flavors of peach pie with pretty floral notes and only seemed off-dry in sweetness level because of the mouthwatering acidity; a long flavorful finish.