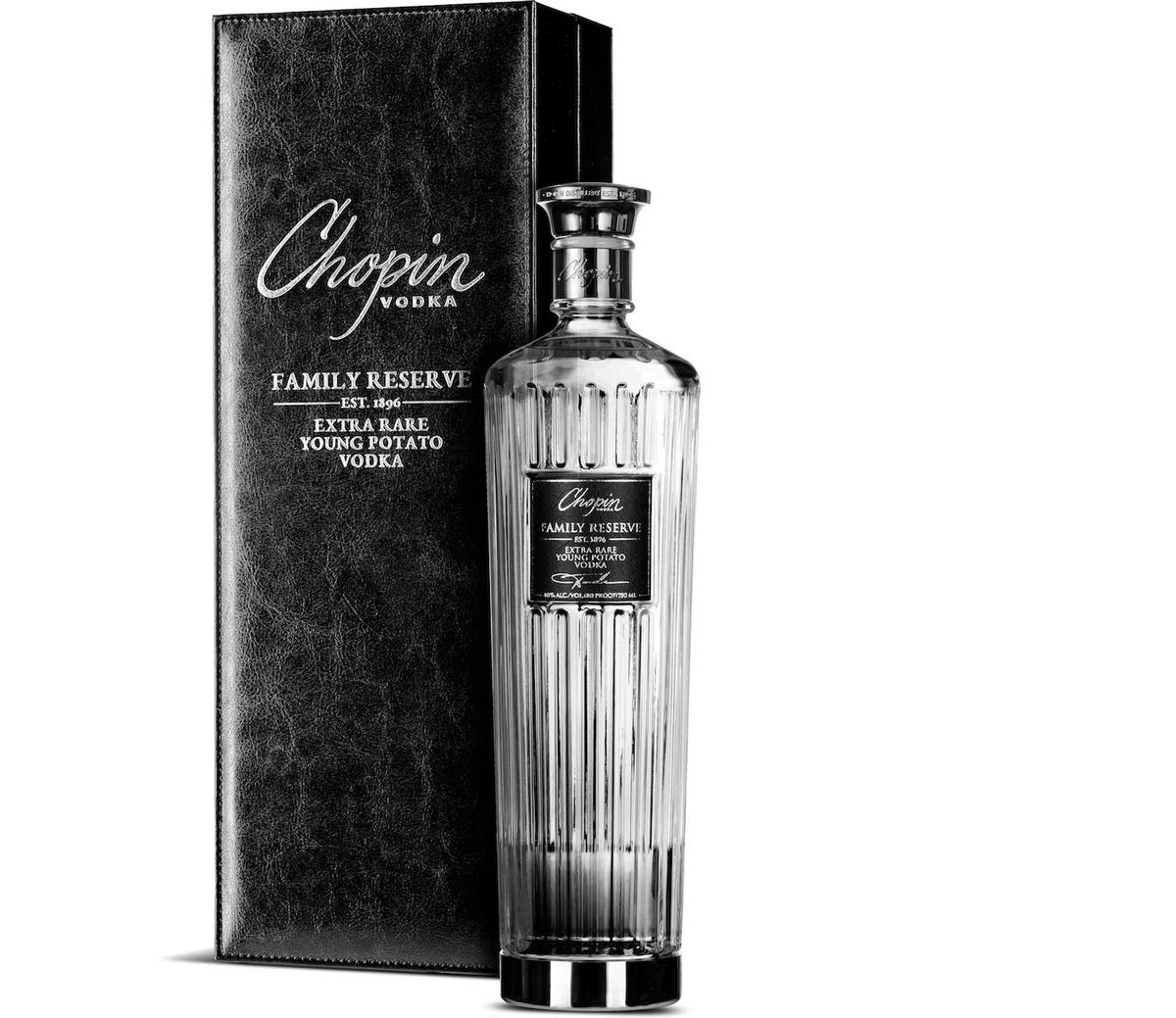 Last year, Chopin released its Family Reserve. Touted as the world’s first ‘ultra-luxury vodka’, it’s a unique spirit distilled from a special variety of young potato harvested in eastern Poland. It also retails for a jaw-dropping $150.

There have been far more expensive vodkas released over the years. But virtually all of those examples rely on some form of gimmick. In 2012, Stoli Elit launched its Pristine Water Series. The first edition utilized water from the Himalayan mountains and fetched $3,000 per unit. Since then there’ve been bottles dressed in Swarovski crystals or encrusted in rare gems. The most audacious offering of all was filtered through crushed diamonds and then packaged in a platinum and rhodium encased bottle, with a diamond-set neckband designed by Leon Verres. The aptly-named Billionaire Vodka sold for $3.75 million.

Ostentatious outliers aside, high-end for vodka (say, Grey Goose or Ketel One) typically means a cash outlay of no more than $30. Chopin’s entry marked the first times that a brand dared to break the three-figure barrier for a vodka, based on the value of the actual liquid itself.

It was the brainchild of the company’s owner and founder, Tad Dorda. He opted to take a winemaker’s approach to vodka production, overseeing the cultivation of young potatoes. As the name implies, they’re harvested early—only three months into the growing season. The tender tubers are characterized by a lower starch content and a sweeter top-note than their fully matured counterparts.

Distillation was fine-tuned to help maintain some of those subtleties. After being proof down off the still, the 80-proof clear spirit spent time in 50-year-old Polish oak to mellow out any sharp edges. Quite a lot of effort for a category of liquor that’s commonly derided as colorless, odorless and flavorless. Clearly, this was a gesture intended to emphatically put those notions to pasture.

“Everyone told him it was a bad idea,” recalls brand ambassador Joel Caruso of the costly endeavor. “But Tad had a vision and he saw it through. And it’s amazing.”

Caruso has a biased opinion on the subject, of course. Yet after sipping—yes, actually sipping—this liquid, it’s difficult to dispute. There is smoothness, body, a touch of rose petal sweetness and even clove-like complexity to its gentle finish. It is undoubtedly unlike any vodka you’ve ever tried before.

In fact, the only alternative that draws anywhere close to comparable sophistication comes from Chopin’s direct competition: Belvedere. The other premium Polish vodka label—now owned by luxury giant LVMH—debuted its Single Estate Rye series in 2018. As you might suspect from the name, each release draws its grain from just one farm.

It is the brand’s contention that terroir can, indeed, be exhibited by vodka. And yes, there is a difference in flavor between the slightly citrusy Lake Bartężek bottling and its creamier colleague from Smogóry Forest. Whether or not it’s owed to the rye is just something for you to ponder while comparing and contrasting the $44 releases.

And that’s definitely not pricey enough to hoist it into the conversation of world’s most expensive vodkas. But when taken alongside the Chopin Family Reserve it certainly makes you wonder what’s going on over there in Poland. Whether by grain or by young potatoes, the country is producing some of the most complex offerings the category has ever known. Maybe it’s something in the water. But that’s a whole other conversation.

Where to go in Hawaii: a beginner’s guide
The Best Part About Eating Out In Tomorrow’s Restaurants
Kangaroo Valley: Top Sights from this Scenic Getaway
The best all-inclusive hotels in Barbados, including sunbed butlers and swim-up suites
Why now is the perfect time for a Wind in the Willows adventure on the Thames