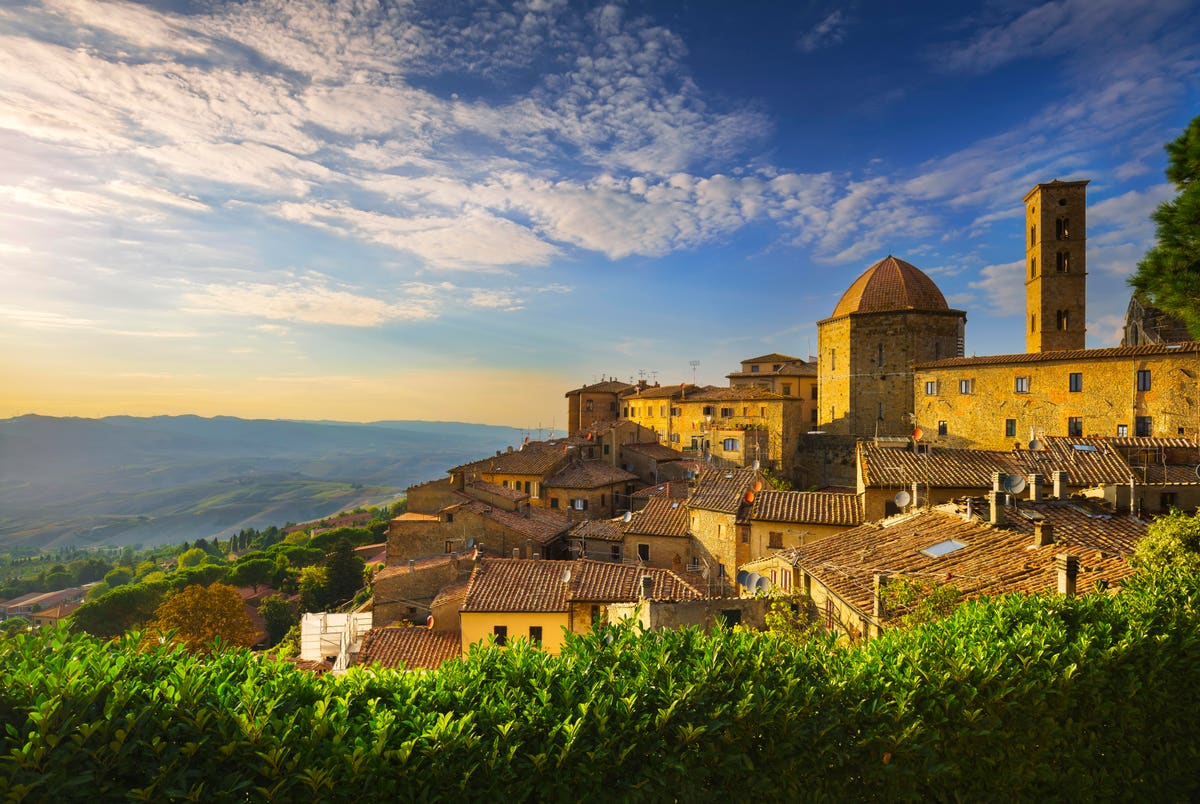 Some avid ‘Super Tuscan’ wine drinkers may think of the Maremma area along the coast in Tuscany when it comes to seeking wine producers, or even more specifically Bolgheri in the northern part of the Maremma, but hardcore ‘Super Tuscan’ wine drinkers know of the high elevation vineyards of Querciabella’s Camartina vineyard, located in the village of Ruffoli, tucked away in the municipality of Greve in Chianti, when it comes to a top tier red Tuscan wine that is all about elegance.

An industrial entrepreneur named Giuseppe Castiglioni was a great lover of fine wine –throughout the years collecting and drinking many cases of Bordeaux, Champagne and Burgundy. It was always in the back of his mind to make wine in Tuscany that could be considered on the same level as some of the great wine regions that he adored. In 1974 he bought a small vineyard in Ruffoli in the shadow of Mount Querciabella along the Greve river; the mountain was named for all the beautiful oak trees that adorned the area – ‘quercia’ meaning oak tree and ‘bella’ meaning beautiful. In 1979 he produced his first wine under the label Querciabella that was mainly Sangiovese with a small percentage of Cabernet Sauvignon and Merlot. Today that first wine is designated as a Chianti Classico DOCG and made with 100% Sangiovese. In 1981 he made his first top tier ‘Super Tuscan’ wine called Camartina that has made its name over the years for its finesse over power and then in 1988 he produced his iconic white Batàr which accomplished what many thought was impossible: a white Tuscan wine that was just as prized as the top red wines of the region.

Querciabella already has a fascinating story, especially considering its unique role in the ‘Super Tuscan’ movement that is highlighted by their Batàr wine, but there is a surprising aspect of one of their philosophies as it is rooted in veganism and so their story is that much more compelling as there is not such a huge demand for fine wines that are vegan.

Giuseppe’s son, Sebastiano Cossia Castiglioni, inherited his father’s love for fine wine as he traveled with him to visit some of the top estates in Burgundy and Bordeaux. But it was not only fine wine that captured Sebastiano’s attention as an encounter in his early teens with an animal activists’ protest struck him deeply and he “started a lifelong mission to protect the rights of animals as well as preserving the environment”, according to Giorgio Fragiacomo, export manager of Querciabella. In his early 20s, he convinced the winery workers to switch to an organic way to working in the vineyards, unbeknownst to his father. Once the organic practices were established in the Querciabella vineyards in the Greve area of Chianti, Sebastian went to his father to discuss the idea of organic viticulture. Giuseppe thought it would be too difficult and so he gave a firm no to trying it, to which Sebastian replied that they were already organic which then started them on the path of pioneering organic farming in the Greve area.

Many of the Burgundy wine producers that Sebastiano and his father revered happened to be biodynamic. And so, through time, Sebastiano studied the biodynamic philosophy of Rudolf Steiner and it wasn’t so much the “spiritual side” that intrigued Sebastiano but it was the “holistic point of view”, noted Giorgio Fragiacomo. The idea of being aware of how everything was interconnected and that a discipline towards keeping an equilibrium within an environment must be adhered to was the most appealing aspect to Sebastiano. Giorgio gave an example by stating that if they notice vegetation on their farms have become “stunted” they should have the “courage to expand” their wooded areas in regards to keeping a holistic balance. Interestingly enough, Querciabella’s vineyards are certified organic, since 1988, but are not certified biodynamic despite converting to biodynamic in 2000 as it has to do with Sebastiano’s commitment to being a vegan. There are some practices, such as burying cows’ horns and such in the biodynamics regimen, that go against Sebastiano’s vegan beliefs as all forms of exploitation of animals are not acceptable in a strict vegan philosophy, and so, no animal products can be associated with Querciabella wines in the vineyards or cellars, and so they are vegan-friendly wines; hence why a biodynamic certification cannot be attained despite them following many of the other practices.

Querciabella’s iconic white ‘Super Tuscan’ Batàr has certainly become a model for other Tuscan fine white wines and it was certainly “ahead of its time” as Giorgio states. In 1988 Giuseppe bought a few rows of Pinot Bianco (Pinot Blanc) near his winery in Ruffoli, Greve, as he was curious to experiment since some of his favorite wines were white Burgundy such as the great wines of Bâtard-Montrachet. So Giuseppe at first made a 100% Pinot Bianco that he only gave to friends and loyal clients around the world. As time went on he planted Chardonnay in some of their highest elevation vineyards, going up to almost 2,000 feet, and added it to the wine until they had attained around a 50/50 blend of Chardonnay and Pinot Bianco. They changed the original name from Bâtar Pinot by taking off the circumflex accent over the first ‘a’ yet adding a grave accent over the second ‘a’, as the wine producers in Bâtard-Montrachet didn’t appreciate it, and they dropped the Pinot all together finally coming up with Batàr which is trademarked by Querciabella.

Although Batàr has a “very Burgundian style” it is still proudly Tuscan, as all the Querciabella wines share such a sentiment, and in a way the wines focusing on expressing a precise sense of place in Tuscany, such as the marly schist, slate soils of the Batàr vineyards, can be the most Burgundian aspect of them. Their winemaking style has changed due to realizing that there were better ways to retain that sense of place, depending on the vintage, in the cellar which is being spearheaded by their winemaker Manfred Ing. As a whole, Querciabella has decreased their use of new French oak, such as only 20% being used in the 2016 Batàr, and lees stirring a.k.a. bâtonnage (stirring the dead yeasts cells resulting from fermentation while in barrel to create texture) will either happen by hand with a stick in the barrels during cooler vintages or it will go through a gentler process of rolling the barrels in warmer years.

Ethics at the Core

Querciabella has at its heart two men who have stayed true to their core ethics – Giuseppe laying down the foundation that was based on the spirit of Burgundy with the essence of Tuscany and his son, Sebastiano, bringing a set of values that keeps the winery and vineyards in balance with nature as well as his commitment to animals which doesn’t necessarily sell more bottles in the fine wine world. Today, Sebastiano’s greatest concern is animal rights and he is investing in innovative businesses that are helping to protect the rights of animals with his venture capital company Vegan Capital. And that is what sings in all of the Querciabella wines, a devotion to a clear, focused path that doesn’t deviate with trends but stays true to the passions of its owners; every facet of their passion may not connect to those who love drinking their wines but their commitment brings a vibrant spirit that can be experienced by all.

2017 Querciabella ‘Mongrana’, Maremma Toscana DOC, Maremma (Alberese and Grosseto), Tuscany: 50% Sangiovese, 25% Cabernet Sauvignon and 25% Merlot. Sebastiano Castiglioni is a lover of art as well and while most of the labels of Querciabella are drawings by artist Bernardino Luino, the ‘Mongrana’ label is a photo taken by Sebastiano and it changes every year. This is from a property that the Castiglioni family purchased in 1988 that was planted in 2000. The vineyards are warmer than their sites in Chianti and hence it typically has a generosity early in its life. A soft, round texture with lots of sweet red fruit with licorice and baking spice that had a supple and juicy finish.

2016 Querciabella ‘Querciabella’, Chianti Classico DOCG, Chianti (Greve, Panzano, Radda and Gaiole), Tuscany: 100% Sangiovese. This was their first wine made in 1979 with a small amount of Cabernet Sauvignon and Merlot but since their 2010 vintage it has been 100% Sangiovese and it is considered the purest expression of Sangiovese for Querciabella. According to Querciabella’s brand director, Sunny Gandara, there are around 83 different plots of Sangiovese that all have galestro soil, a type of metamorphic, medium grain clay schist that is highly prized in Tuscany for high quality wines with a strong sense of place. A beautiful, lifted nose with bright red cherries and mint that has more black cherry notes on the palate with good amount of flesh that is balanced by a mineral edge and bright acidity.

2015 Querciabella ‘Camartina’, Toscana IGT, Chianti (Ruffoli in Greve), Tuscany: 70% Cabernet Sauvignon and 30% Sangiovese. The warmer 2015 had more generosity and accessibility than the 2016 and so this wine is already drinking well at this stage. “The Cabernet is very expressive in this vintage at a very young stage but it is still growing into its structure” noted Sunny Gandara. The ‘Camartina’ is only made in select vintages and the percentage of Cabernet Sauvignon has increased throughout the years as the intention is to showcase a Tuscan Cabernet from high elevation vineyards – over 1,000 feet. An intense floral note really draws one into this wine which is already displaying complex notes of tobacco and gravelly earth that keeps a lovely balance between rich concentration and overall vibrancy.

2016 Querciabella ‘Batàr’, Toscana IGT, Chianti (Ruffoli in Greve), Tuscany: 50% Chardonnay and 50% Pinot Bianco. This iconic, cult wine was extremely impressive right off the bat with an exquisite nose that displayed saline minerality with hints of hazelnuts and its depth of flavor was expansive on the palate with white nectarine, rosemary and freshly picked chanterelle mushrooms that had a sensual creaminess with a backbone of focused acidity that had a long finish, leaving notes of butterscotch and a smoky minerality in one’s head.

Celebrate 100 years of women’s suffrage with these monuments
The best things to do in Lake Bled, from amazing hikes to hot air balloon rides
Readers voted these hotels and resorts the best in the U.S.
Why you shouldn’t bother paying more for brown eggs
10 things you HAVE to do in Oahu