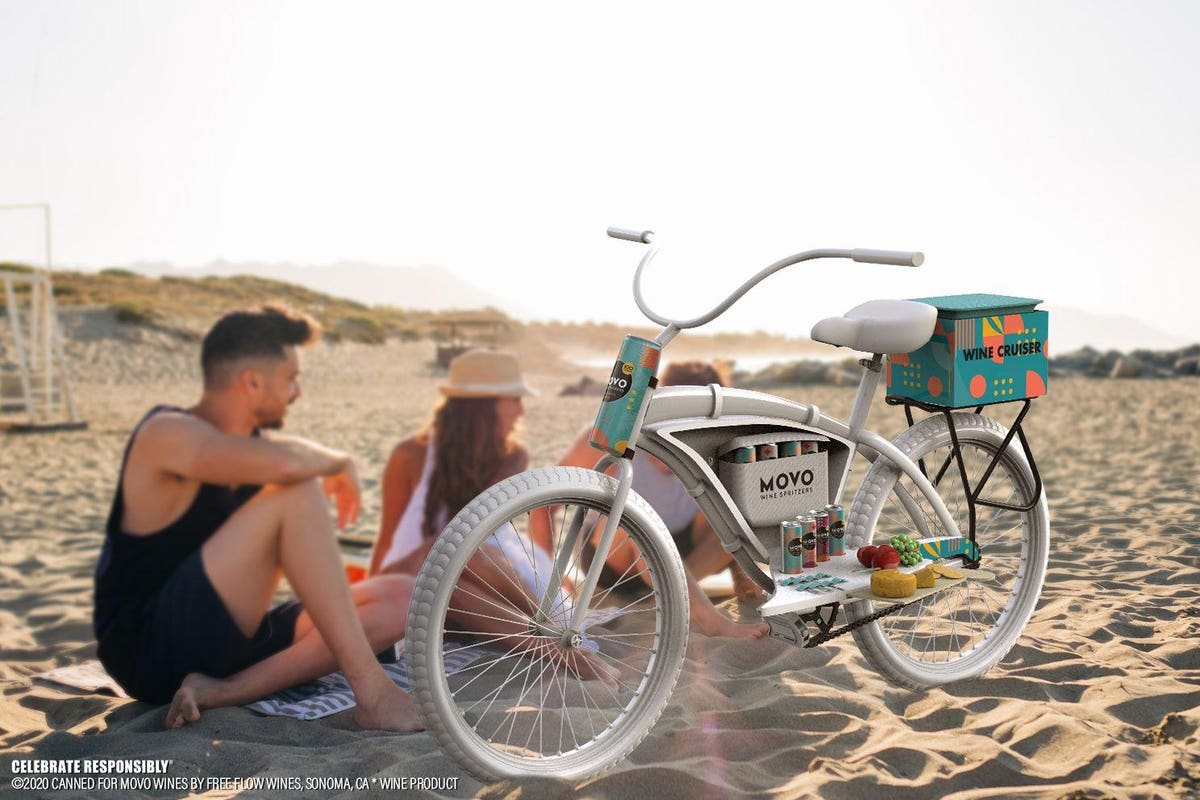 To celebrate National Wine and Cheese Day today, a canned wine spritzer company is selling a souped up bike with a built-in wine cooler and charcuterie board.

Not only that, but MOVO wine spritzers is selling them for $8.99 or the price of a four-pack of their spritzers. The catch? Only four of them have been made, and they go on sale today (Saturday, July 25) at noon, EST, on the company website, at movowinecruiser.com. Once they’re gone, they’re gone.

“We wanted to reimagine what the wine bar of summer 2020 looks like,” says Lisa Rudman, director of North American innovations for Molson Coors, which makes MOVO wine spritzers. “We added charcuterie boards because they are truly having a moment, too. Not just bikes. And, do we even need to mention how synonymously cheese and other accoutrements go with wine?”

The bike is “an ultimate wine lover’s bicycle,” she says. It’s a cruiser with an attached cooler that fits a four-pack of wine, as well as a built-in, fold-out charcuterie board for cheese and meats. “We wanted to reimagine what the wine bar of the summer of 2020 looks like,” she says. “We have a whole new lifestyle, and we’re spending more time at home, finding new ways to exercise outdoors. Plus, bike sales are through the roof.”

With those trends, MOVO decided to do a promotion that’s a twist on bikes, wine and “the art of staycation and exploring your own backyard,” Rudman adds.

The price of just $8.99 is approximately what a cost of a four-pack of MOVO retails for. “That’s a cute nod to our brand, if we do say so ourselves,” she says.

It’s a first-come, first-serve promotion, and once the four bikes are gone, they’re gone. But the promotion is a hope to get MOVO, a new canned wine spritzer with only 100 calories per can and no added sugar, on the minds of consumers so that they’ll pick up a four-pack of peach white blend, raspberry rosé or blood orange sangria. “We believe wine was meant to be fun,” Rudman says.

“Summer is spritzer season, and we’re seeing a lot of excitement around MOVO,” Rudman says. “It’s hitting the right mark for our key demographic of women, ages 25 to 34.”

Rudman points out that the Wine Cruiser promotion comes during a summer when sales of canned wine have skyrocked, up 79 percent over last year, according to Nielsen. Bike sales are also going through the roof, with the highest sales figures since the oil crisis of the 1970s, she says.

“Bikes are cool and literally flying off the online shelves, wine sales are thriving and we must be back in the 80’s because millennials love wearing spandex,” she says. “So, the MOVO Wine Cruiser is the perfect combo to answer both hot takes happening this summer – bikes and being trendy while sipping your wine outside.”

Tuscany’s Wine Harvest At Risk As Seasonal Workers Blocked By Italy’s Black List
Kangaroo Valley: Top Sights from this Scenic Getaway
15 unbelievably cheap private islands you can rent in the US
How To Score Free Beer Today In Honor Of International Beer Day
Summer Calls For Shakaratos In Hawaiʻi