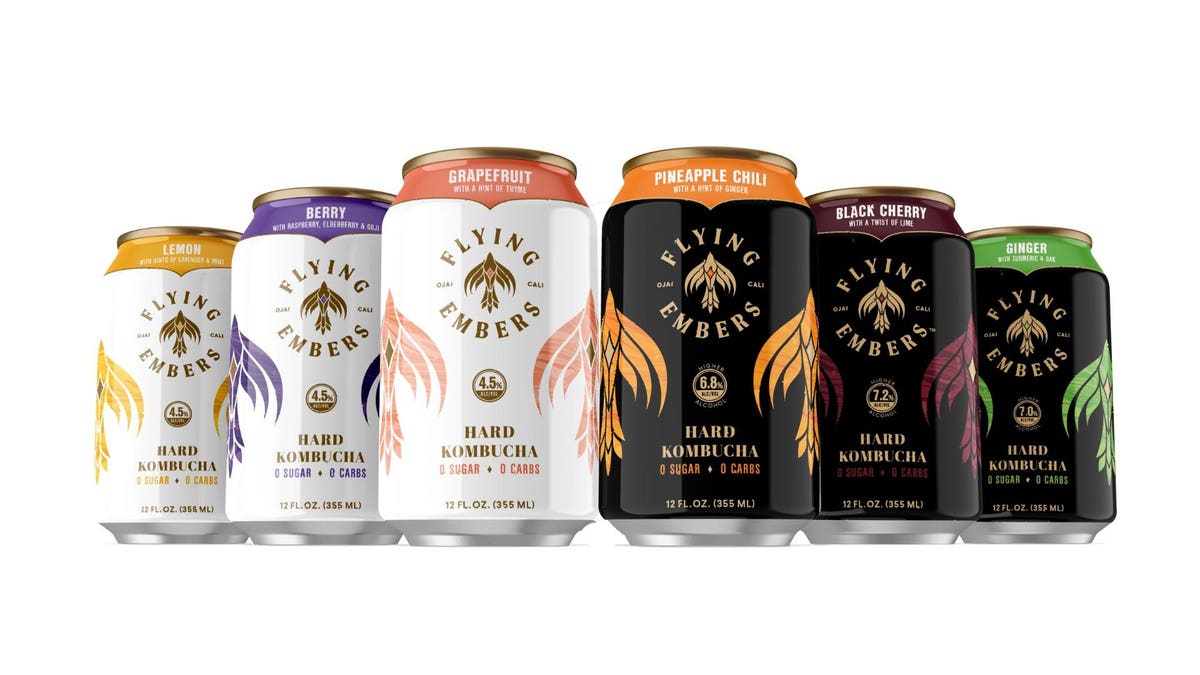 Earlier this month, Fermented Sciences – which makes the Flying Embers line of hard kombucha and hard seltzer – partnered with Cal Fire and donated $50,000 worth of its online sales to directly support frontline workers across California.

“Giving back to first responders is in our DNA,” founder and CEO Bill Moses said.

Fermented Sciences, itself a California-based company, has its own history with wildfires. Shortly after founding the business in 2017, Moses nearly lost his Ojai research and development facility to the massive Thomas Fire that tore through Ventura County that year.

In fact, inspiration for the Flying Embers name came from watching firefighters combat the blaze, which at the time threatened Moses’ own home as well as the company’s fermentation lab.

“I came to appreciate what they do and how they sacrifice, and ever since then I’ve committed the brand and everything we do – our purpose – to giving back to first responders,” Moses said.

After that experience, Moses committed to donating a portion of Fermented Sciences’ revenue to charitable organizations that support first responders.

In the years since, Fermented Sciences has quickly scaled a hard kombucha brand in a nascent category that most consumers still haven’t discovered.

To help bring attention to the hard kombucha segment, and build additional offerings under the Flying Embers banner, Fermented Sciences has raised $35 million as it works to become a national leader in shelf-stable probiotic products that also give back.

Moses, who has referred to his capital backing as a “war chest,” has overseen expanded distribution of Flying Embers products into 40 U.S. states and led the development of a probiotic-infused hard seltzer line.

Additional product innovations are in development, and the company’s growing direct-to-consumer and e-commerce business has helped it win new customers during the COVID-19 pandemic.

PEP
for over $250 million — shared insights into the emerging hard kombucha category and explained why he believes Fermented Sciences is poised disrupt the entire alcoholic beverage industry.

The following interview has been condensed and lightly edited for clarity.

Chris Furnari: What sparked your interest in creating a version of kombucha with a much higher alcohol content?

Bill Moses: When I started Fermented Sciences, it was really about innovating other fermented beverages, across alcohol and non-alcohol that were better-for-you. I was watching hard seltzer start to take off a few years ago, and the nexus of better-for-you non-alc trends into alcohol became pretty apparent to me. The first thing that came to my mind was the challenge and difficulty of keeping the alcohol in a kombucha under 0.5% in the non-alcoholic space. Why not let it go higher? It seemed like a natural progression.

CF: You come to the alcohol industry as a non-alcoholic beverage entrepreneur that’s already experienced a tremendous amount of success. What lessons are you bringing from that world, and what’s the learning curve been like?

BM: I’ve participated in and witnessed how to develop a category, and know what insights are required to see if in fact something is going to take hold. With the PepsiCo partnership, what I learned is that execution at shelf is critical. The second thing I learned was that data insights are critical to getting the mix right. And the third thing I learned was to make sure that you have really smart spend. There has to be ROI. The greatest challenge in the alcohol space versus non-alc is the management of the 130 distributors we have across the country. Having cost-effective touchpoints across all of those — in order to partner and drive execution across classes of trade that the distributor partner controls – that’s the game.

CF: Where do you see the hard kombucha space going in the coming years?

CF: How big is the hard kombucha category today, and how big can it get?

BM: The guesstimate right now is that the hard kombucha category, across all classes of trade — both reporting and non-reporting — is about $50 million. It’s growing triple digits, and the latest independent research I saw said it could be $1 billion by 2027.

CF: So, the hard kombucha category is only worth about $50 million today, and yet you’ve raised $35 million. How do you square that?

BM: Hard kombucha will probably represent the smallest piece of our revenue next year. We’re a better-for-you platform.

BM: We’ll be releasing a beer this Fall. I can’t give too many details, but we’re going to be partnering with one of the largest retailers in the U.S., and the beer will be called Flying Embers Active Ales. That will be the “category” that we’re defining – active, active lifestyles, etc. We’re also going to be launching better-for-you canned cocktails, and wine spritzers, and we’ll be releasing more details on those probably early next year.

CF: And do you have your eyes on anything outside of the alcohol segment?

BM: We’re looking obviously and non-alcoholic beer, which is very much on trend, and we think there are other opportunities to move into a traditional alcohol format with a non-alcoholic SKU.

CF: What makes your products better or different from some of the competitors that are also out there?

BM: First, we’re USDA Organic, which I’d say half the current players are, and probably half aren’t. The second thing that I think really differentiates us is that we have zero grams of carbs and zero sugar. We’re the only ones who have claimed that at the moment. And the third piece is that we never pasteurize. So, we’re still “live” and “raw,” but yet we’re shelf-stable. And that is the manufacturing IP that we believe sets us apart in the alcohol space where floor stack and shelf space is of value.

Would you dare baptism in the Devil’s Bathtub?
American Airlines plans pilot training on Boeing 737 Max in November
Here Is Why Your Next Cup Of Tea Will Cost More Money
From piste to pub to pillow: an insider ski holiday guide to Passo Tonale
Restaurant Chains Big And Small Are Encouraging Employees To Get Out The Vote