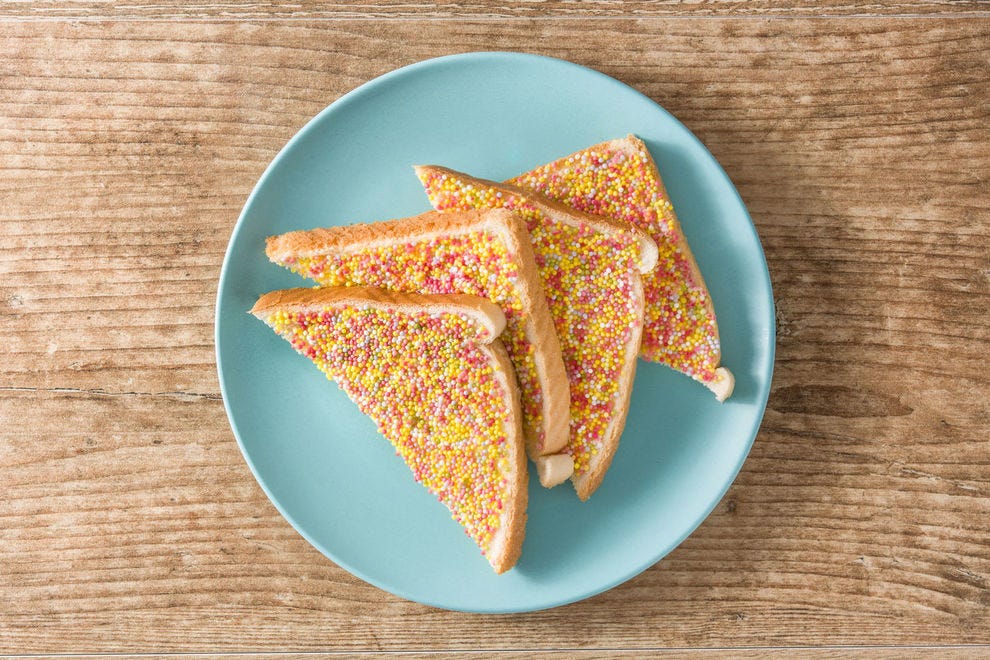 The first time you hear about fairy bread, it’s perfectly normal to question whether Australians are just messing with you. But this colorful snack from down under is somehow completely legitimate.

Steeped in nostalgia, fairy bread is relatively simple with only three ingredients, yet it is a ferociously defended part of the country’s national identity (and New Zealand’s as well).

So what exactly is fairy bread? Well, here’s the big reveal: it’s white bread sliced into triangles, spread with butter and topped with rainbow sprinkles. That’s it. Australians take fairy bread seriously, but at the same time, they have a sense of humor about it. 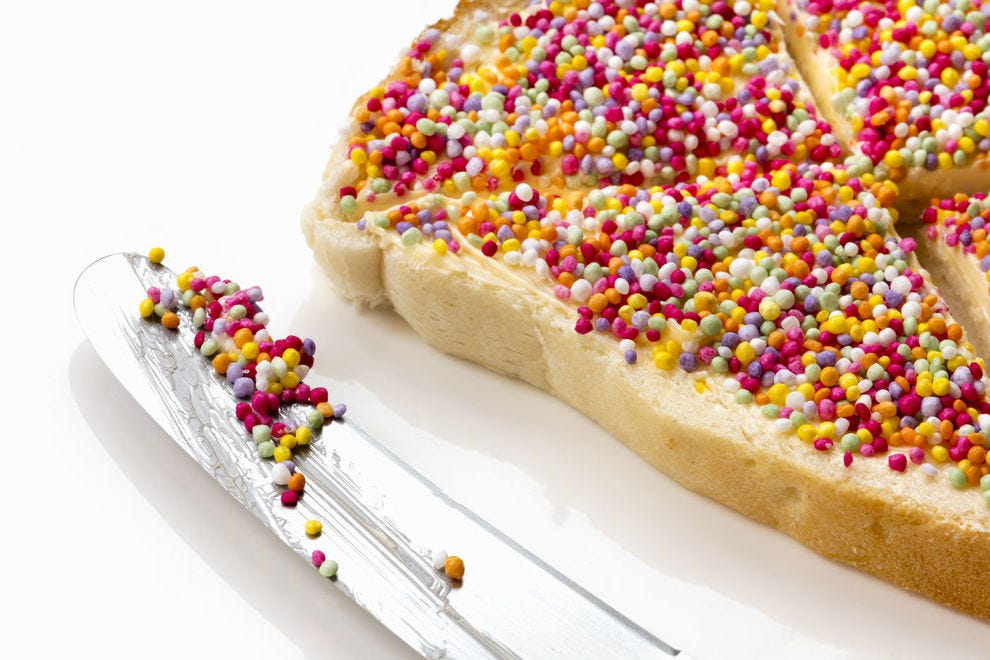 It’s the inherent lack of complication that contributes to fairy bread’s army of ready defenders. There have been attempts to describe the treat as something more haute than it actually is, which undermines its simple existence as an indulgent, sugary food. Those three ingredients are considered sacred and unchangeable; should anything be added or altered, the dish is transformed into something else entirely.

A corollary with which Americans may be familiar is the comfort food of comfort foods that we call grilled cheese: bread, butter or mayonnaise, and melted cheese grilled together in an irresistible sandwich. Attempts to cuisine it up have been contentious among aficionados, the most serious of whom know that a grilled cheese with any added filling is no longer a true grilled cheese. (At that point, you might as well call it a melt.) 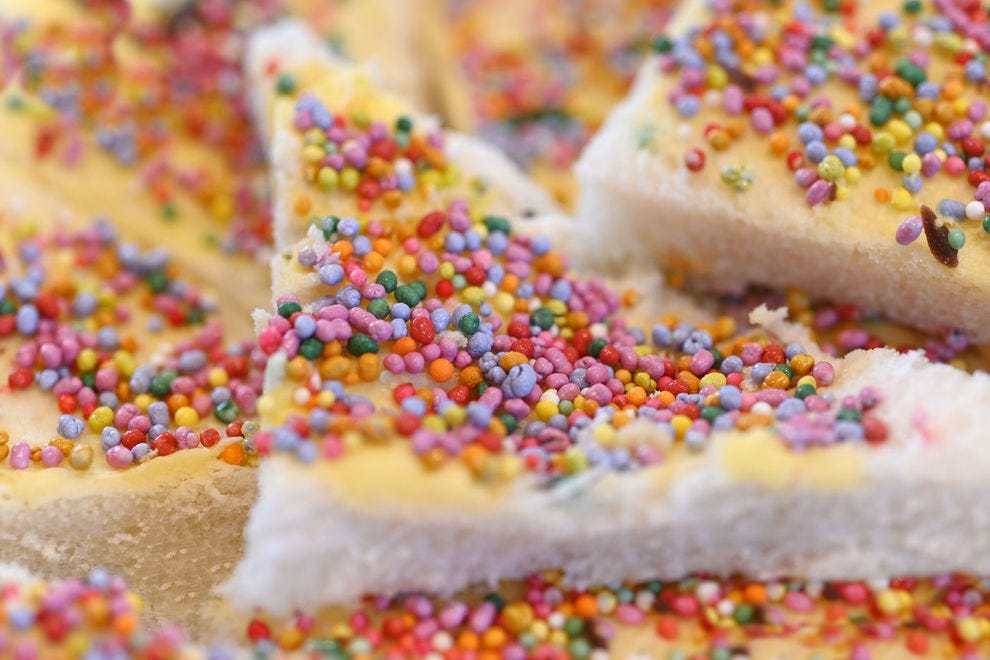 Come, fairy bread! Take me out of this dull world (apologies to Yeats) — Photo courtesy of iStock / chameleonseye

The same hard limits are apparently applied to fairy bread as well, whether it’s being prepared in Australia or neighboring New Zealand. The first thing to note is that what Americans call sprinkles are referred to as “hundreds and thousands,” but not just any colorful bits of sugar will do.

“The hundreds and thousands have to be the hard, round kind – none of this sugar string crap,” says Simon Thomson, a Kiwi travel writer and fairy bread aficionado. “And if it’s not quartered in triangles with the crusts removed, it’s bull–.”

The bread itself can’t just be any old loaf of gluten; it has to be standard white bread from the grocery store, pre-sliced. “Preferably thick,” adds Aussie cookbook author Mardi Michels, and “spread with butter, [also] thick.”

According to the Australian Food Timeline, this inflexible yet whimsical snack was first documented in 1929 in an article for the Hobart Mercury. This story described “a party for child inmates of the Consumptive Sanitorium,” mentioning how “the children will start their party with fairy bread and butter and 100s and 1,000s, and cakes, tarts…”

Although it’s possible that fairy bread referred exclusively to the bread itself, the combination stuck, becoming a staple of Australian children’s cuisine.

If not sliced into triangles, can you really call it fairy bread? — Photo courtesy of iStock / etorres69

“It’s the stuff of everyone’s childhood birthday parties,” Michels explains. “It’s also an easy party food for kids to prepare themselves – although watch out if you spill those 100s and 1,000s – and I remember being allowed to do this and feeling very accomplished!”

The simplicity in its construction is enjoyed across the Tasman Sea as well. “I definitely remember taking full sandwich versions of fairy bread to school for lunch,” shares Claire Adamson, another writer and fairy bread fan from New Zealand.

Nowadays, fairy bread is experiencing something of a moment. The first-ever National Fairy Bread Day was held on November 24th in 2014, starting an annual tradition that continues to be observed. There are nearly 40,000 posts on Instagram tagged with #fairybread, showcasing the breadth of interpretations. Of course, it helps that the treat is so inherently photogenic. 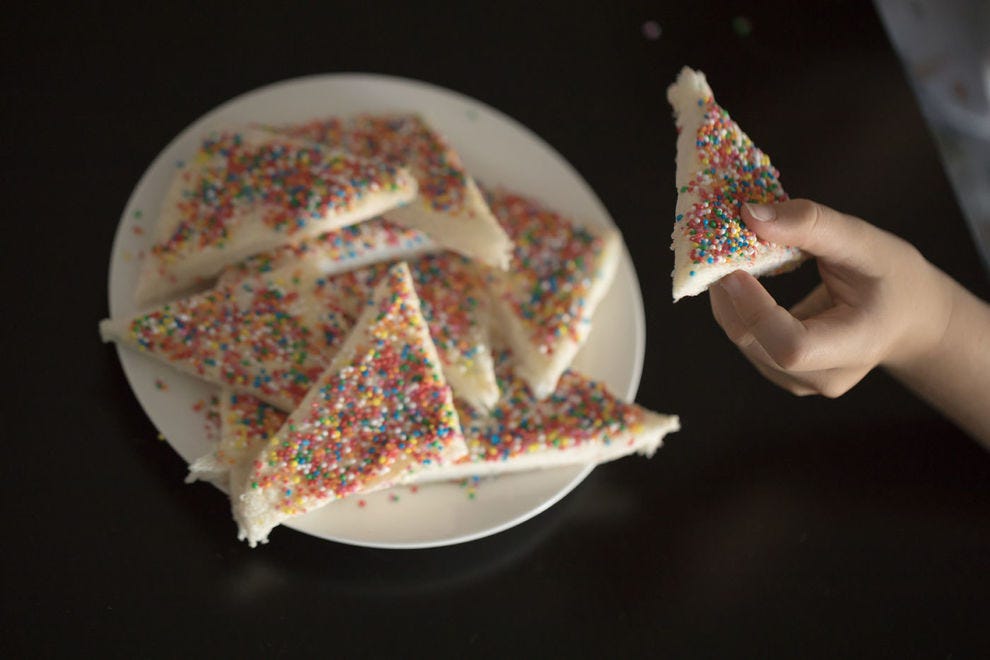 Even though fairy bread won’t be found alongside Tim Tams and Cheezels in Australian grocery stores, this classic snack will undoubtedly continue to occupy the imaginations and children’s birthday parties of our friends down under. As it journeys across oceans and into the Instagram accounts of cultures worldwide, one can only hope new adopters will stay true to its preferred configuration. It’s not like it’s that hard.

These are America’s best casinos, both in and outside of Vegas
Staycations with style: the hottest UK hotel openings for 2020 and 2021
Papa John’s To Move Headquarters From Louisville To Atlanta
Rediscover the San Juan Islands: Adventure-seekers will love this Northwest destination.
Your guide to the best places for fall colors this year