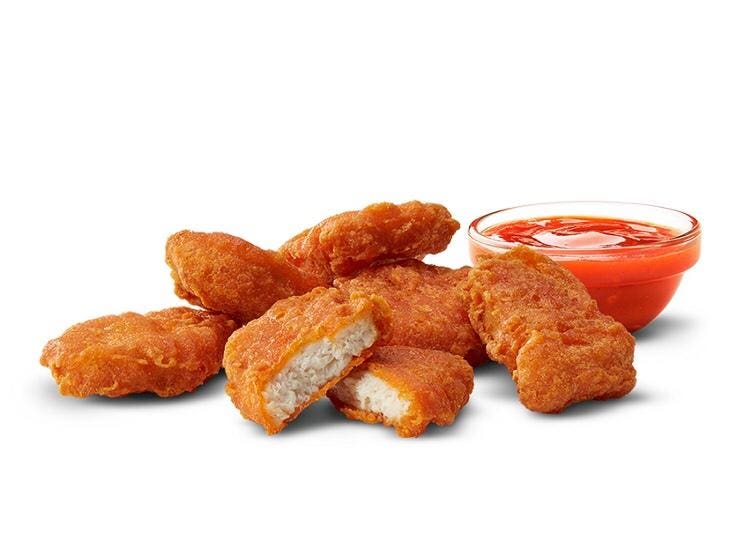 MCD
has used the pandemic as an opportunity to innovate.

It scored a hit earlier this month with a $6 combo meal curated by rapper Travis Scott.

And on Wednesday, it rolled out the first variation on its Chicken McNuggets since the little bite-sized nibbles were introduced in 1983.

Spicy McNuggets are roughly the same size as regular McNuggets, but are breaded with a tempura coating that contains cayenne and chili peppers.

McDonald’s put on a social media blast Tuesday for the new McNuggets, and offered a buy one, get one offer for six spicy McNuggets via its app.

As it turns out, the Spicy McNuggets popped up this weekend in Chicago, McDonald’s headquarters city, where food critic Michael Nagrant got an early taste.

I’ve crossed international borders in the past to try some of McDonald’s new products, like the P.L.T. (for plant-based, lettuce and tomato) that it sold last year in Southern Ontario.

That test ended quietly in June, without much fanfare.

But, since Spicy McNuggets were available in my hometown of Ann Arbor, I ventured out to track them down. Here’s what I found when I visited three McDonald’s stores, starting around 10 am Wednesday.

Signage: you’d have to look pretty hard to find any promotions for the Spicy McNuggets. There were no signs on the front windows of any of the franchises.

There were small signs in the driveways leading up to the menu boards at two of the McDonalds outlets, urging customers to “get them spicy, add on sweet.”

They showed a 10 piece Spicy McNugget collection with a Chips Ahoy McFlurry, another special promotion.

A third McDonald’s gave no clue that Spicy McNuggets were coming, although Travis Scott’s name was in big letters on the menu board.

Timing: Spicy McNuggets are not an all-day item, as I learned when I rolled through my closest McDonald’s. “Come back at lunch time,” one clerk told me.

Another was more specific: the Spicy McNuggets would be available at 10:30 am.

When I arrived at the third store at 10:43 am, the Spicy McNuggets were ready.

Price: Spicy McNuggets start in a six-piece size (I asked for the four-piece serving that comes in a Happy Meal, but was told I could not buy fewer).

Appearance: Spicy McNuggets come in a white box, with orange and green lettering, and small yellow flames on three sides.

The McNuggets themselves are a bright orange, in contrast to the usual golden brown of a McNugget. They are the same size as a McNugget. The spice is incorporated into the coating, so you needn’t worry about having Cheeto fingers.

Flavor: When you first bite into them, you may think, “This isn’t spicy.” But, then the heat starts. It begins about halfway through munching on them, and an after taste lingers for a few minutes after you’ve finished the Spicy McNugget.

No, it won’t set your mouth on fire, but it makes a point. If you don’t like it, some gum or a strong mint will easily remove it. An hour later, the spicy flavor was gone, thanks in part to the big glass of ice water I drank afterwards.

The Spicy McNuggets seem to keep their crispy integrity a little longer than traditional McNuggets, which I’ve noticed get a little stodgy when they cool off. The spice might be a factor.

Dipping sauce: Because McDonald’s sign put the idea of “sweet” in my head, I decided to request honey packets as a sauce. That helped cool down a little of the heat.

Then, I realized that the perfect accompaniment is actually ranch dressing, which would set up a faux Buffalo McNugget combo.

Don’t get me wrong: the Spicy McNuggets don’t have the kick of a true Buffalo Wing, but the coolness of ranch seems like a good companion for them.

Verdict: The Spicy McNuggets live up to their name. They’re tasty.

But the flavor seems more suited for starter spicy than for serious spicy. It doesn’t compare with the heat from spicy Popeyes Fried Chicken, the Nashville Hot that KFC has sold, or authentic hot chicken from a reputable chicken spot in Nashville.

Will they sell? I’m probably not McDonald’s target demographic. Having tried them, I plan to stick with traditional McNuggets.

However, with the Big 10 voting to resume football, and with McNuggets so popular for tailgates and viewing parties, I could see a demand for Spicy McNuggets among fans and their friends.

I can envision midnight Spicy McNugget drunk eating contests in which participants pop them at a fast rate.

For those dining sober? Just get some ranch dressing to go with them.

The best accommodation in Courchevel, including luxury chalets and family-friendly rooms
Staycations with style: the hottest UK hotel openings for 2020 and 2021
From piste to pub to pillow: an insider ski holiday guide to Courchevel
Top butchers explain how to make great vegan meat
The ultimate New England fall foliage road trip