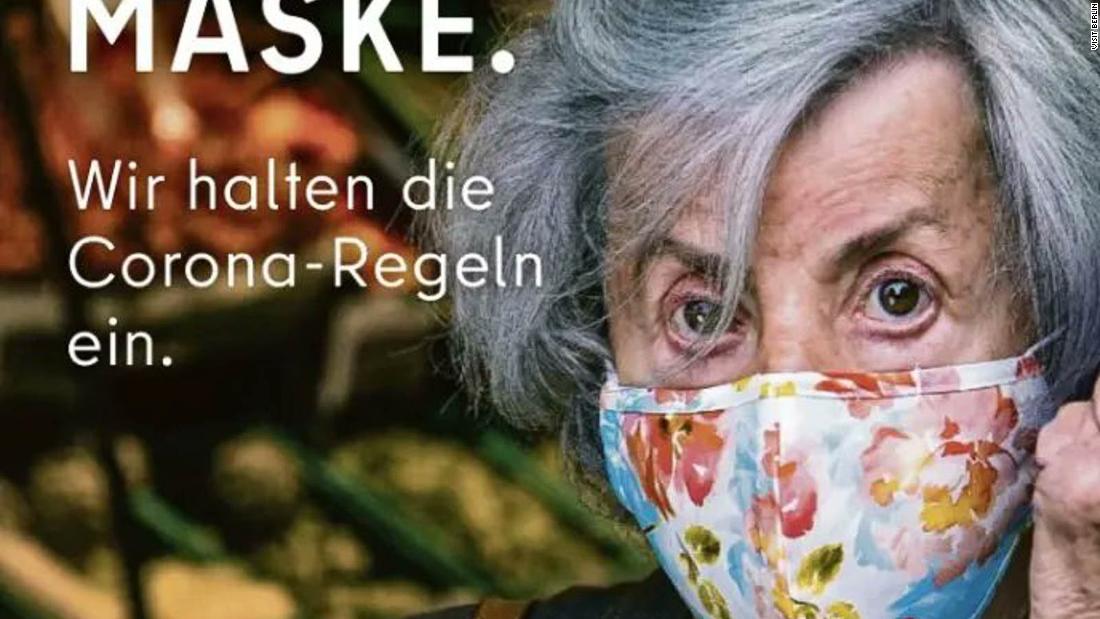 (CNN) — It’s the kind of mask-wearing advert you’d expect to see: a sweet older woman in what appears to be a homemade floral mask, showing what is expected of us.

But where Berlin’s new campaign image takes a different turn is in what she’s doing: giving the camera the bird.

“Up yours to those who don’t wear a mask — we obey the corona rules,” reads the advert, which was launched in September and has now gone viral, causing a stir amongst the notoriously direct citizens of the capital of Germany.

The advertisement is part of a campaign the city will run for six months, until March 2021, starting with ads on public transport.

Some of the advertisements, like this, are image-based; others are entirely textual. One reads: “Liberté. Egalité. Charité?,” riffing on the French national motto of “Liberty, equality and fraternity” — only swapping the latter for Charité, the name of one of Berlin’s best known hospitals.

But it’s the image of the woman flicking the vs that has caught the public’s attention.

Christian Tänzler, spokesperson for Visit Berlin, which is behind the advertisement, told CNN that the aim of the image was to shock people into paying attention.

“Most people in Berlin are respecting the rules, but there is a minority who don’t, and they’re risking the lives of others — of older people and at-risk communities. We wanted to give attention to this problem,” he said.

Berliners are known for being direct, he said — and that’s what they were aiming for.

“For the whole campaign we chose the language that people understand. We didn’t want to say, you have to do this, we wanted to get their attention, and we wanted to do it with Berlin humor,” he said.

And although he says that some people — mainly those who are unable to wear masks for medical reasons — have complained, most feedback has been positive.

“People say it’s good that you’re naming the problem,” he says. “We want to save lives with this campaign.

“Infection rates are rising very fast, and we need to pay attention to that, to be able to make it through the next wave.”

Masks are compulsory in the German capital when shopping and on public transportation. And with cases rising in a feared second wave, the government is also mulling an evening curfew.

The city is also producing advertisements in English, Turkish and Arabic, and will soon debut a mural, as well as live paintings in the city squares.

And if you think the old lady flipping the bird was too much, be warned — there may be more coming.

“The next images will be more humorous,” said Tänzler. “Not more old ladies, but something you’ll laugh about.”

Dresden Elbland: Where Baroque Meets Urbanity and Nature Abounds
Mysterious jetpack man is not the only person to take flight in unconventional ways
Southwest Airlines says it will sell every seat
Nonalcoholic Drinks Grow In Popularity During Coronavirus Outbreak
10 small batch maple syrups you need to try